Learning ASP.Net MVC series:
In the setup part of the series I've created a set of specifications for the ASP.Net MVC app that I am building and I manufactured a blank project to start me up. There was quite a bit of confusion on how I would continue the series. Do I go towards the client side of things, defining the overall HTML structure and how I intend to style it in the future? Do I go towards the functionality of the application, like google search or extracting text and applying word analysis on it? What about the database where all the information is stored?

In the end I opted for authentication, mainly because I have no idea how it's done and also because it naturally leads into the database part of things. I was saying that I don't intend to have users of the application, they can easily connect with their google account - which hopefully I will also use for searching (I hate that API!). However, that's not quite how it goes: there will be an account for the user, only it will be connected to an outside service. While I completely skirt the part where I have to reset the password or email the user and all that crap - which, BTW, was working rather well in the default project - I still have to set up entities that identify the current user.

How was it done before?

In order to proceed, let's see how the original project did it. It was first setting a database context, then adding Identity using a class named ApplicationUser.
ApplicationUser is a class that inherits from IdentityUser, while ApplicationDbContext is something inheriting from IdentityDbContext<ApplicationUser>. Seems like we are out of luck and the identity and db context are coupled pretty strongly. Let's see if we can decouple them :) Our goal: using OAuth to connect with a Google account, while using no database.

The starting point of any feature is coding and using autocomplete and Intellisense until it works reading the documentation. In our case, the ASP.Net Authentication section, particularly the authentication using Google part. It's pretty skimpy and it only covers Facebook. Found another link that actually covers Google, but it's for MVC 5.

Both tutorials agree that first I need to enable SSL on my web project. This is done by going to the project properties, the Debug section, and checking Enable SSL. It's a good idea to copy the https URL and set it as the start URL of the project. Keep that URL in the clipboard, you are going to need it later, as well. 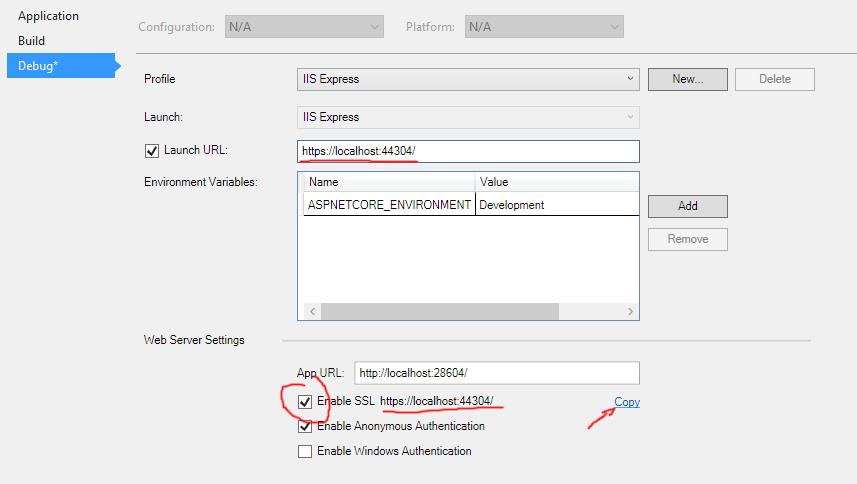 Next step is installing the Secret Manager tool, which in our case is already installed, and specifying a userSecretsId, which should also be already configured.

Next let's create credentials for the Google API. Go to the Google Developer Dashboard, create a project, go to Credentials → OAuth consent screen and fill out the name of the application. Go to the Credentials tab and Create Credentials → OAuth client ID. Select Web Application, fill in a name as well as the two URLs below. We will use the localhost SSL URL for both like this:Press Create. At this point a popup with the client ID and client secret appears. You can either copy the two values or close the popup and download the json file containing all the data (project id and authorised URLs among them), or copy the values directly from the credentials dialog. 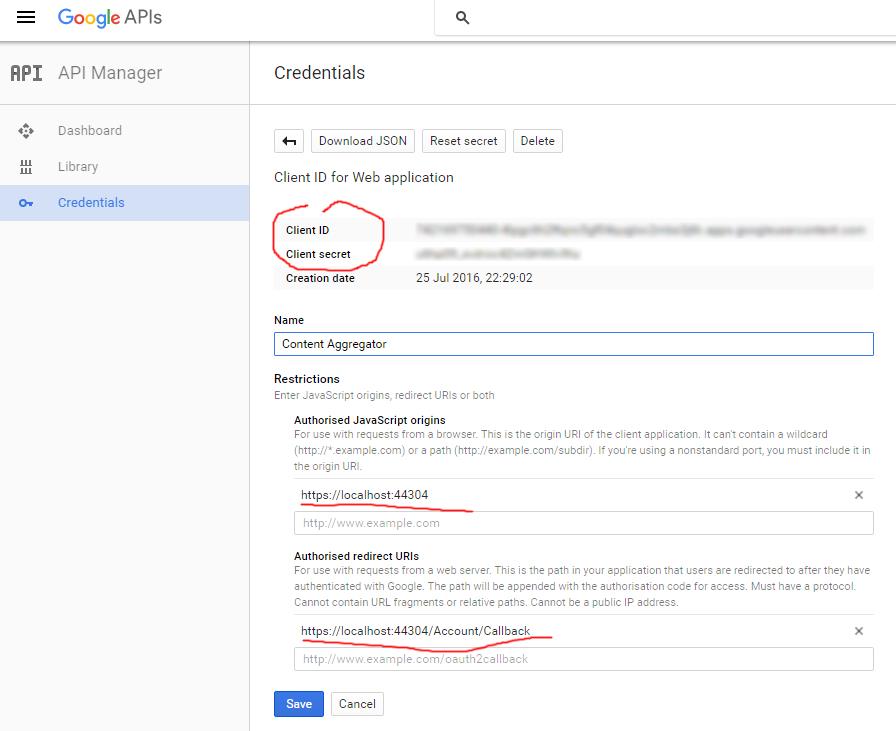 Make sure to go back to the Dashboard section and enable the Google+ API, in the Social APIs group. There is a quota of 10000 requests per day, I hope it's enough. ;) 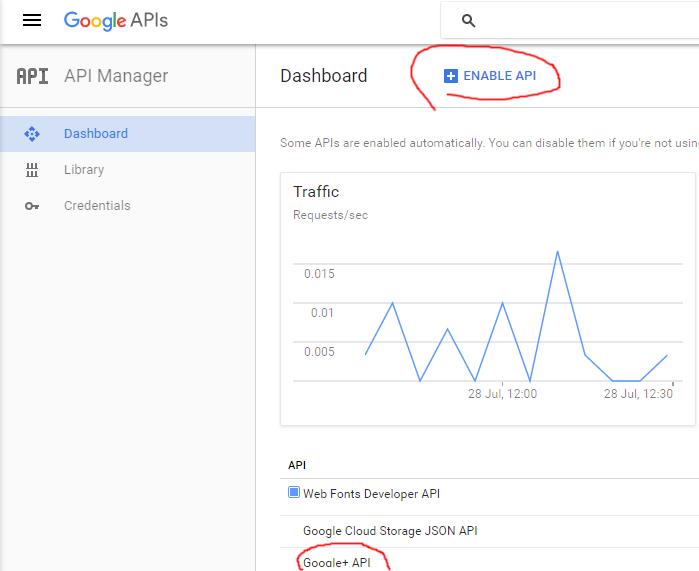 Let's use the 'dotnet user-secrets' tool to save the two credential values. Run the following two commands in the project folder:Use the values from the Google credentials, obviously. In order to get to the two values all we need to do is call Configuration["Authentication:Google:ClientId"] in C#. In order for this to work we need to have loaded the package Microsoft.Extensions.Configuration.UserSecrets in project.json and somewhere in Startup a code that looks like this: builder.AddUserSecrets();, where builder is the ConfigurationBuilder.

Now we need to place this in Startup.cs:Yay! code!

Let's start the website. A useful popup appears with the message "This project is configured to use SSL. To avoid SSL warnings in the browser you can choose to trust the self-signed certificate that IIS Express has generated. Would you like to trust the IIS Express certificate?". Say Yes and click OK on the next dialog.

Yet, the project works just fine. I need to do one more thing for the application to ask me for a login and that is to decorate our one action method with the [Authorize] attribute:After we do that and restart the project, the start page will still look blank and empty, but if we look in the network activity we will see a redirect to a nonexistent /Account/Login, as configured:

Let's create this Account controller and see how we can finish the example. The controller will need a Login method. Let me first show you the code, then we can discuss it:
We simply return a ChallengeResult with the name of the authentication scheme we want and the redirect path that we get from the login ReturnUrl parameter. Now, when we restart the project, a Google prompt welcomes us: 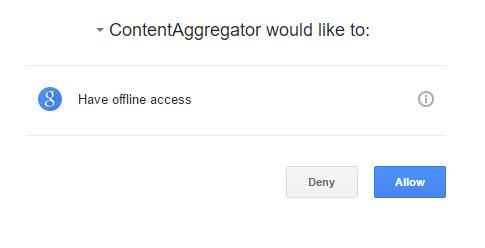 After clicking Allow, we are returned to the home page.

One extra functionality that we might need is the logout. Let's add a Logout method:Now, when we go to /Account/Logout we are redirected to the home page, where the whole authentication flow from above is being executed. We are not asked again if we want to give permission to the application to use our google credentials, though. In order to reset that part, go to Apps connected to your account.

What happens when we deny access to the application? Then the callback action will be called with a different set of parameters, triggering a RemoteFailure event. The source code on GitHub contains extra code that covers this scenario, redirecting the user to /Home/Error with the failure reason:

What about our user?

In order to check the results of our work, let's add some stuff to the home page. Mainly I want to show all the information we got about our user. Change the index.cshtml file to look like this:Now, when I open the home page, this is what gets returned:
User is a System.Security.Claims.ClaimsPrincipal object, that contains not only a simple bag of Claims, but also a list of Identities. In our example I only have an identity and the User.Claims are the same with User.Identities[0].Claims, but in other cases, who knows?

If you think it was easy to scrap up this simple example, think again. Before the OAuth2 system there was an OpenID based system that used almost the same method and class names. Then there is the way they did it in .NET proper and the way they do it in ASP.Net Core... which changed recently as well. Everyone and their grandmother have a blog about how to do Google authentication, but most of them either don't apply or are obsolete. So, without further due, let me give you the links that inspired me to do it this way:

By no means this is a comprehensive walkthrough for authentication in .NET Core, however I am sure that I will cover a lot more ground in the posts to come. Stay tuned for more!

Source code for the project after this chapter can be found on GitHub.