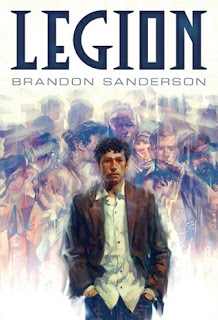 Brandon Sanderson wrote two short books about the Legion character, which is different from the Legion character from the Marvel comics and TV series. It is basically about a guy who hallucinates other people around him, specialists that help him solve "cases". People are not sure in what box to put him. Is he schizophrenic, is he multiple personality disorder, something else? It doesn't really matter, since he is functional and (with the help of his imagined personalities) brilliant.

Yet, while the character can be compelling, the stories are rather boring. The joking punny positivism of Sanderson's characters is barely there, while the setup is that of classic detective stories. There is no fantasy like in Cosmere, nor are there interesting ideas that blow your mind. Just short average books about a quirky detective. It can't get less original than that, I believe.

Bottom line: without some serious redesign of the concept, I doubt Legion is a character that warrants further exploration.