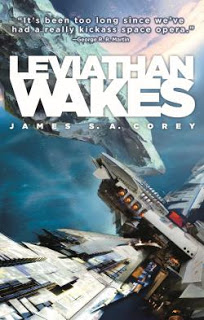 I absolutely love the TV series The Expanse and so, after ten torturous weeks in which I would alternatively get filled with joy at the release of another episode, then fall into despair when it ended, I've decided to cut out the middleman and read the damn book. And now that I've read it, I have to say that I am really glad to have seen the show first. It's not that it is a bad book - it is not, it's very good - but the show is better and having the characters in the series blend with the ones on the page is turning them into something more fleshed out, more complex. And I am not the only one thinking that.

For example, in the book the viewpoint alternates, chapter by chapter, between Miller and Holden. The chapters don't even have other titles other than these two names. In the book Naomi is a slight romantic interest, but nothing more than that. Amos is just there, doing stuff. Alex is barely fleshed out. It is Holden who is the undisputed captain of the Rocinante and that's it. Similarly, Miller's partners or even Anderson Dawes are just shadows of the complex characters they appear in the TV show. One of the things that I really loved about the show was that it was reasonably accurate scientifically and I kind of thought the book would be even more detailed about it. In the contrary, it was not. The authors even said in an interview that they never intended to make a hard sci-fi thing, but just to tell the stories of people in the less used fictional period between stuck-on-Earth and interstellar humanity. The weird language melange that is shown in the TV series is only vaguely mentioned in the books. Also the Earth lady in the show is not in this book at all.

But enough about the show. Leviathan Wakes is the first in The Expanse series of more than five books, written by James S.A. Corey, which is actually a pen name for Daniel Abraham and Ty Franck, both collaborators of George R.R. Martin (Franck was his personal assistant, for example). More than five books because there are also some interstitial short stories and I am sure they are going to write some more stuff. The plot of the book is about people living and working in space. You have densely populated Earth, a colonized Mars that is undergoing terraforming and the Belt, people living on the large asteroid belt between Mars and Jupiter. And of course, people being people, they hate each other. Enter an unknown entity that lights the powder keg for reasons unknown that are slowly revealed as the book goes on.

Miller is the typical noir detective, cynical, not trusting, obsessive to the extreme and trying to prove to the world and himself that he's still "got it". Holden is the typical good guy, wanting to save everybody and hoping that all will be well if people just know the truth. Their dynamic is interesting, but for me the story was more captivating when they hadn't met each other. The first season of the show ends when the book is about half way through, but from then there is a period of inactivity, one of those parts when everybody knows what is going on and still they have to go through the movements. In real life this is where the role of the characters would be over, but since it is a book, the same characters continue the story, although it feels a bit disconnected. The ending of the book is epic, in its grand scale, but almost boring from a literary standpoint.

Bottom line: I will continue reading the next books of The Expanse, however I have to say that I am shocked at the difference in quality between the show and the book. Probably it is much easier to do that when you have good actors carrying the load and a lot more book material to work with before you start envisioning your world, but still awe is the feeling I am getting from the TV show.