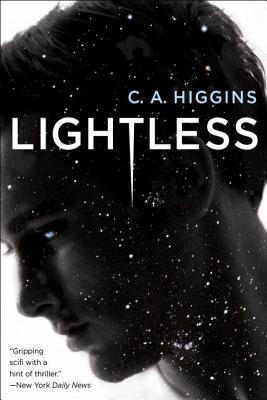 I haven't been as frustrated with a book as with Lightless for a long time. Everyone in it is incompetent to the level of cretinism. The only people remotely good at what they do are psychos, all of them.

I understand why books like these need to be written: when you write a character based play-like story you become a better writer, but it doesn't mean what you write is any good. In this case, a character based story has cardboard shapes moving around randomly instead of characters. It failed. The main character is a computer programmer. As one, I felt insulted that C.A. Higgins believes we are that moronic.

As for the plot, that's the most redeeming factor, but it's not great either. In a future where mobile devices don't exist and locks are still based on physical keys and the Solar System is under the iron boot control of ... err... The System, an organization straight out of Blake's 7, with the same cartoonish efficiency, a mysterious ship is boarded by two people who turn out to be criminals the System wants. 90% of the book is people being dumb and talking to each other, all while assuming they are the bread of the universe. The rest is people doing really dumb things.

Conclusion: all the "smart" bits of the book were obvious from the start, making the journey of the buffoons in the story to figure them out really boring. The idea of the Ananke was added only to make this, of course, a trilogy. It reads like a theater play with people being stuck in a room.