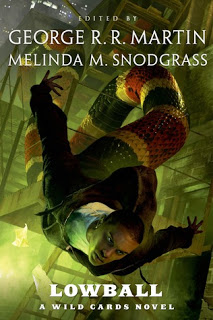 It was difficult to finish Lowball. First of all, I didn't remember a lot of the characters that were supposed to be well known. That's on me. Second of all, a lot of pages were dedicated to the personal life of one or another, including family squabbles and marriage proposals and all that. I don't know about you, but myself I didn't need or want to read that. It made the book feel boring and lifeless. But the worse sin of the book was that it was unbalanced.

Melinda Snodgrass describes action that happens in the middle of Jokertown, a small area of New York populated with jokers, people affected by an alien virus that changed them into impotent ugly monsters, then extends it to the outskirts and eventually other countries, involving as hero characters: a local police officer, a SCARE agent, his old friends, local jokers who are slightly aces (aces have advantages conferred to them by the infection) and - did I mention - their significant others, mothers in law, etc. The scope keeps shifting from aces and law enforcement agencies that are paralyzed for no real reason to regular people who somehow do more than anybody else, from international intrigue to very local issues. Some of the stuff that happens bears no real relevance to the main plot.

The book eventually became a bit more focused and the action started to pick up. And when I was finally getting to the point where something was going to happen and closure was close, the book ended. What the hell happened? Not even an epilogue. Abruptly everything ends with a cliffhanger that you can't even understand and credits roll. The next part of the "triad" of books seems to be High Stakes. I will read it, too, because I want to read the Wild Cards books in their entirety, but to be honest, I don't think I even enjoyed Lowball.