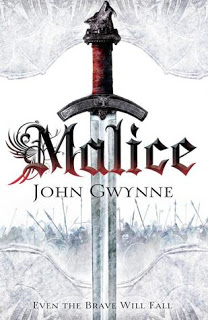 Have you ever found a book so bland that you just refused to continue reading it? To me it happens rarely, but it did with Malice, by John Gwynne. And I do feel a sense of loss, since the reviews I've seen are all so overwhelmingly positive. Maybe if I would have just read a few more formulaic chapters I would have gotten to the part when something, anything, happens.

But no, I do have a lot of books to read and I am not going to waste my time reading about another child who wants to be a hero, but he's weak and bullied, another large blacksmith who was once a soldier, another pair of good and evil gods and their minions, noble savages, strong princesses, evil viziers and so on and so on. After several chapters all I got was a bunch of people in different contexts, each with their own names, friends, family, dreams, history and narration. Whenever I thought something would happen, another character with a silly name came along to perform whatever ritual is assigned to its cardboard role. Confusing and boring as hell.

Bottom line, I couldn't even begin to finish it. I probably read about 10-15% and gave up.