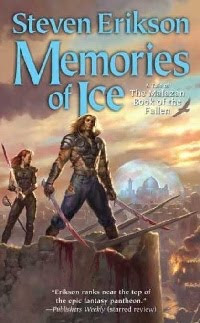 Third book in the Malazan Book of the Fallen series, Memories of Ice is another masterpiece of epic fantasy from Steven Erikson. What Deadhouse Gates had in shere scope of military strategy, this book has in number of people and characters as well as levels of magic. If in Gardens of the Moon the characters would avoid gathering too much power in a single place, Memories of Ice practically heaps mages and powerful creatures.

I enjoyed the book a lot, even though I think the multitude of important characters and the magnitude of their powers was a bit overwhelming. Also, the battles seemed more chaotic, less strategic, considering they came after the impressive story of Coltaine's campaign in Deadhouse Gates. All this was compensated by troop numbers in the hundreds of thousands, major magic users in the tens, an alliance of the T'Lan Imass allied with Caladan Brood and the Tiste Andii and the Barghast and the Malazans and the Rhivi and so many others against the cannibal army of a Jaghut manipulated by a god and so many other gems.

I started reading the fourth book in the series and I will be reviewing it as fast as I can.