Just a quick reminder that there are a lot of Star Trek productions out there, some really terrible, some really good. I am going to talk about three(ish) of them today.

First one is Star Trek: Federation One. It is with a lot of actors you have seen in other Hidden Frontier and Studio Areakt productions and focuses on the chief security of the presidential office of the Federation. While the plot is kind of a mess, the acting was decent and I was actually very sad to see that after the first "season" of two episodes they continued the story in an audio format. Even if the main character looked like he was on speed all the time, I had fun with it. 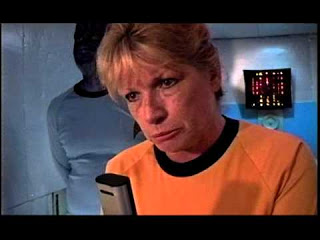 Another one is Star Trek: The Infinite Chain. Even if it is split into "episodes" it is actually a feature film. The acting is a bit amateurish, but decent. No obese teens in this one. It uses the now tired plot of a Federation starship thrown into unknown space by "an anomaly". The worst part of it was the "doctor" that was assigned to the mission. His character was believable: the guy in charge of the project creating the sensors used to study the anomaly, but in truth not a good manager or having any merit in the team. He just explodes randomly in childish emotional outbursts, threatening everybody with his artificial authority, and everybody hates him. I totally know people like that. However the actor was just goddamn awful and his script lines ridiculous! The makeup was ingenious, but really cheesy.

The last, but certainly not least, is something made by the Hidden Frontier team, but not set in the Star Trek universe. I am talking about Frontier Guard. The casting is made with the better actors of previous productions and, while the universe seems very similar to the Star Trek one, it is actually a different thing altogether. They use another type of space propulsion, it involves a FederationFrontier Guard academy and it concerns The Arc, a huge alien artifact that may have seeded the galaxy with intelligent life. Unfortunately, after some great episodes, they completely lost it. They began (some) episodes with "My name is..." evoking feelings of remembrance towards all the bad DC superhero series and movies, they started pointless subplots like the gay relationship thing - which always pisses me off, not because of the gayness, but because of the relationship that doesn't further the plot in any meaningful way - and threw in the towel after the 12th episode (which was an elevator show, basically).

From these three Frontier Guard was the best. My guess is that they wanted to do a Star Trek Academy series - which makes total sense and it should be the direction of the next Star Trek series - but they didn't get the approval. Since this sounds like a really good idea and one that might attract a lot of fans, I believe studios are keeping the story in reserve. However, not being Star Trek allowed them to evolve both stories and characters and I was really excited to see this done. In a world where everybody is remaking remakes, we need and deserve original content. Just look at David Feintuch's Seafort Saga series of books. That would make a fantastic TV series and has enough material to allow for several companion feature films.

For people just considering starting to watch these, do not expect Star Trek Next Generation. The actors are amateurs, I mean real amateurs not professionals who just started acting, most of them are American Trekkies and - even if I don't want to insult - some of them are just humongous pieces of fat with big glasses, which kind of explains the whole geek high school thing that is kind of difficult to understand in Europe. The stories, the lines, the makeup, the uniforms, the special effects, they are all done by enthusiasts. Sometimes they feel cheesy, sometimes they look completely and horribly fake. But once you realize that they are people like you, enjoying the wonderful universe of Star Trek, you can begin enjoying these productions.

I've watched other things as well, including Machinima style animations like Borg War - which I wouldn't recommend, but wasn't bad, and I will continue to look for these things. Just by looking at people like Hidden Frontier, who start doing something for the fun of it and end up doing original stuff with veteran amateur actors, I get filled with hope for the whole fan made universe, not just the Star Trek one. Keep up the good work guys (and if you can't do it good, keep working and it will get there eventually :) )