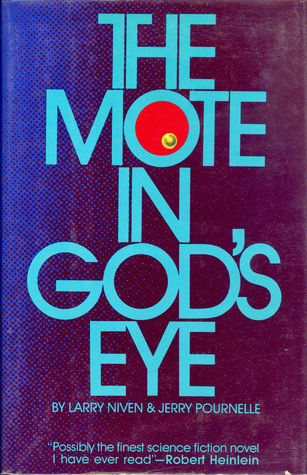 I wanted to read something by Larry Niven, so I've decided to go with The Mote in God's Eye, written in collaboration with Jerry Pournelle. I may have read it a long time ago, decades past, because I remembered one particular line from it, but just that. And it is a wonderful book. I guess I appreciate it now more than I would have ever appreciated it in my childhood because now I know what kind of crap can be sold as science fiction and also how ridiculous most science predictions from 1975 turned out to be.

This book stands the test of time and the test of writing and the test for science fiction. The first one, for me, it's the more extraordinary, but it is helped a lot by the second. It takes a certain amount of maturity to decide to write something respectful to the reader and only include the minimal technical and scientific descriptions required to fully describe the situation. As for the third, I think the genre is defined by asking "What if?" and taking it to a plausible technological extreme. And this book does it brilliantly.

Imagine, if you will, what would happen when the Empire of Man will meet a race of aliens that are stuck in their solar system, but other than that older, smarter, faster and more advanced than we are. The slight anachronism of the book allows for people to discuss what should be done before anything is decided, that both military, political and civilian agencies get to have a say. To get the scientists be actual caring people who argue their cause and viewpoint, the soldiers actual caring people who think about what their best choice should be in concordance with their beliefs, thoughts as well as their orders and to have nobles that care about their empire and their people and listen before they decide. Imagine that in a recent fiction book.

I don't want to spoil it. The species of the "moties" is defined and explored very well, as are the humans and their society. It was interesting to me that the less plausible things were not technological, but biological and medical. We've come a long way since fifty years ago in that area and I am glad to see it. The ending of the book had a much slower pace than the rest. I felt like it was going to end, but it just kept going. It is important to reach the end, but that's just about the only problem I have with the book: the pacing problems at the end.

Bottom line: I forced myself to start reading another book because I wanted to immediately read the entire series, which contains an immediate sequel, a prequel and a 2010 sequel written by Jennifer R. Pournelle, the original author's daughter. I highly recommend it.