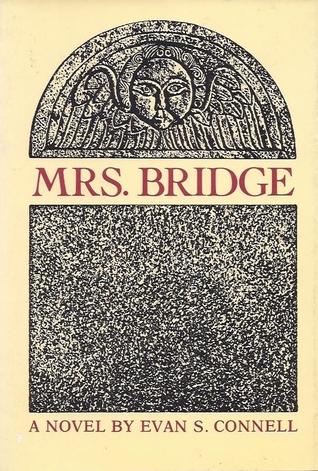 It might sound strange to say this about a book published in 1959, but Mrs. Bridge was a refreshing read. It is made entirely of short chapters - more than 100 of them in a 246 page book - which describe little moments in the life of Mrs. Bridge, the wife of rich lawyer Walter Bridge in the 1930's America. I loved the fact that the chapters were ironic, but remained descriptive, without any judgement. There is nothing to push you in one direction or another; whatever you think of Mrs. Bridge, it's your own verdict, not the author's. The small vignettes are also disjointed, very rarely connected to each other, and although they are told in a chronological order, they shatter any semblance of a story. The book is literally a portrait.

And as I was reading this, I was constantly thinking about this woman. Is she a victim or an abuser? Is she stupid or just simply stuck in a role she can't get out of? Am I sympathetic to her or do I despise her? Is it a tragedy or a comedy? Could and should anyone love her? I was constantly trying to cast judgement as the book kept reminding me that I don't actually need to.

The book felt refreshing for presenting the life of a housewife in a world where women are treated more like pets than human beings, but not going into a tirade about how that's good or bad. It talks about the lives of negro servants, but doesn't shove some message down your throat. It happens before and during the first part of World War II, but it doesn't spout the virtue of Allied forces and condemn the evil of Fascism. It was just great writing which doesn't try to jam some conclusion down the throat.

At first I thought the book was written by a woman and only at the end noticed that it was written by Evan S. Connell. He also wrote a Mr. Bridge book, which I am not sure if I want to read or not. Probably I will, because it completes the tableau. The portrait, you see, is of a couple.

Personally, I feel  Mrs. Bridge is just trapped by her own superego. She has to look and behave as she was trained to, to maintain appearances regardless the cost to her own desires or personality. She doesn't do it for some end goal, she is not political or malicious, she isn't even two-faced, because she has suppressed any other face than the one she is showing. The few moments where her thoughts or desires come to the surface and quickly buried back are just a sign of how tragic the book is. At first I wanted to quote something from the book in the review, but there are so many quotable bits that I've decided against it.

Bottom line: Mrs. Bridge makes you aware of how people lived in the '30s. Easy to read, the book's short chapters hide the depth of observation the author used to write them. In short, I loved it.