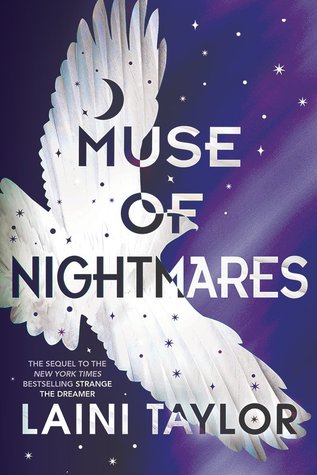 Strange the Dreamer was a book that, while not perfect, was well written and showing a lot of promise. If anything, I was surprised to see that Muse of Nightmares will be the second and final book of the series, because I couldn't understand how everything begun or hinted at in the first book could be wrapped up. And indeed it wasn't, which doesn't mean that I didn't enjoy reading the book. I feel the series lost a lot of unrealized potential, though. By focusing on the main characters, now starstruck lovers that would do anything for each other, Laini Taylor left all the others behind, without a growth arc or closure. Not only that, but she also brings in another antagonist, from the past of one of the slain gods, so she has even less space to work in.

Don't get me wrong, I enjoyed the first book so much that I immediately started on the sequel and I've read this one really fast, too. It was entertaining, it was exciting and it was intense in places. But it wasn't better than the first book and the way it ended, with everything nice and cozy and people realizing their dreams and resolving their inner conflicts and helping each other and so on and son on, made have a feeling of jarring fakeness.

In short, it's a decent book to finish the story, but it went by too fast, paying no attention to characters dragged along from the beginning and left in the dust, focusing too much on love scenes and less on consequential events, using McGuffins all over the place and making people not think of solutions that were employed just pages later by the antagonist using their own powers.

Like Minya using her powers to force ghosts to do her bidding, regardless of their own desires, so did Taylor corral her characters through the narrow confines of her planned storyline.