Ok, what's done is done, Maria wanted to spend more time with her sister and we both got tired of Kyparissi, so we went back to Sparti. This time we went alone, having gotten directions on how to get there. The GPS was useless, since it had no maps of that area whatsoever. I did pin the house on the map, though, so I knew the general direction.

Back towards Sparti, Greece (5)

Of course, we got a little lost. We entered a town we did not know the name of and we found ourselves on a road to Monevasia. We have been to Monevasia, it was in the south, we wanted to go a little north. What should we do? I pointed out to Maria that the road to Monevasia probably meets another one that comes from Sparti, using her own words from the experience with Kulata and Sofia. Of course, now that the same words of wisdom came from my mouth, she decided to turn back. We again entered the nameless village and we noticed a sign towards Sparti (fixed on a wall, so you can only see it when coming from the other direction) so we took that road. We've had the inspiration to stop next to a guy and ask if that was the road to Sparti. No, of course not, it's the other one! (the one from which we came from). 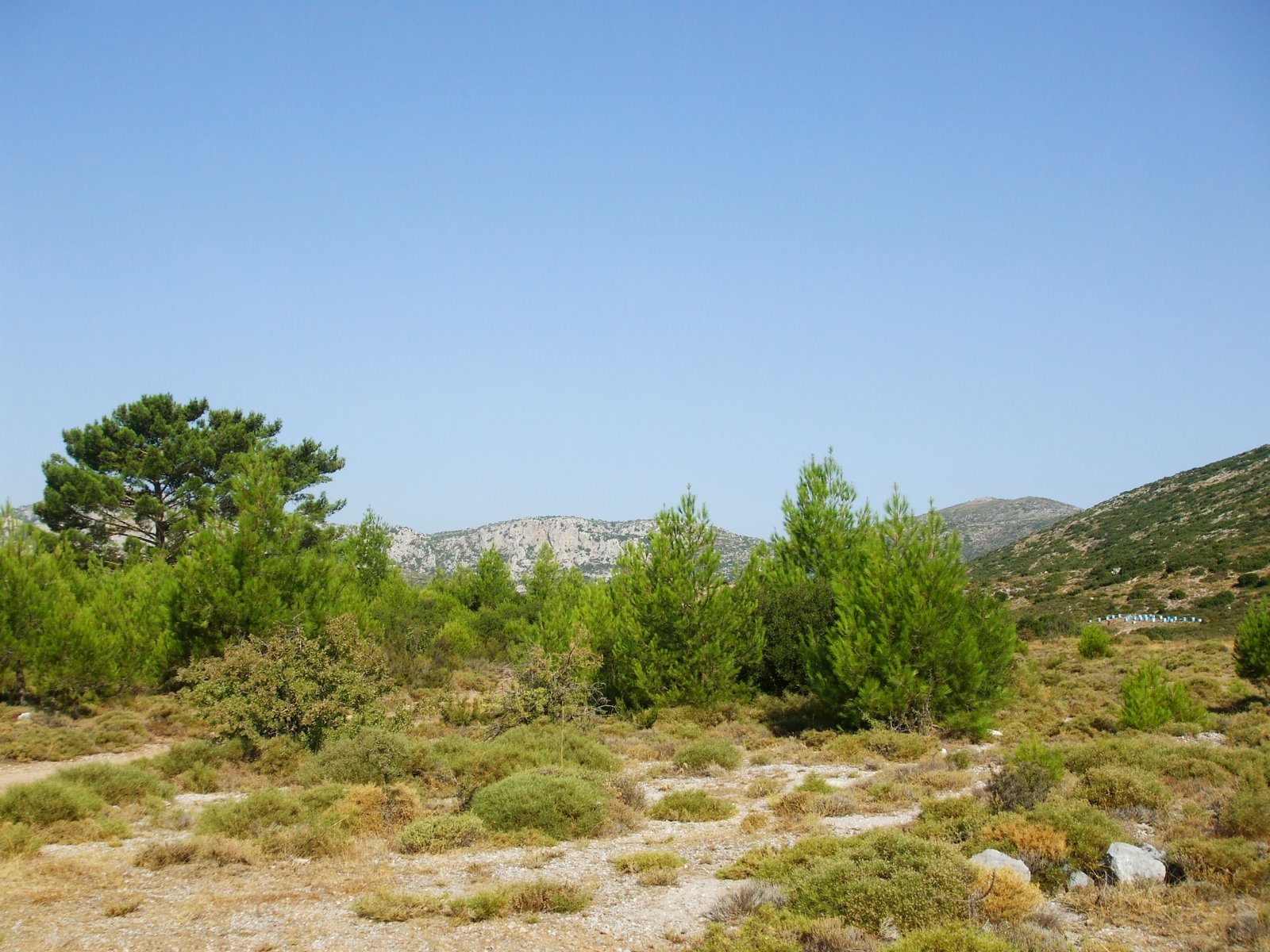 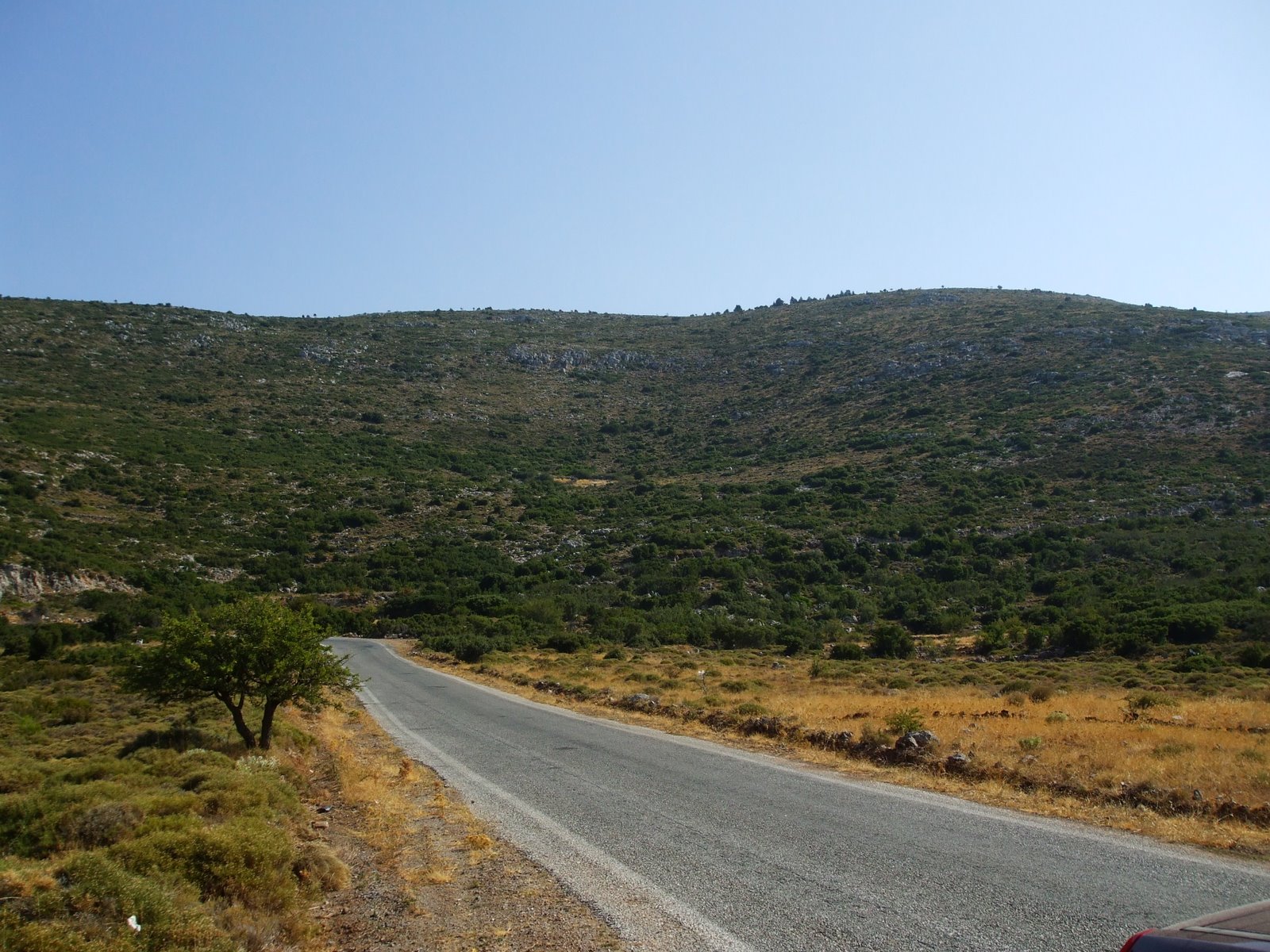 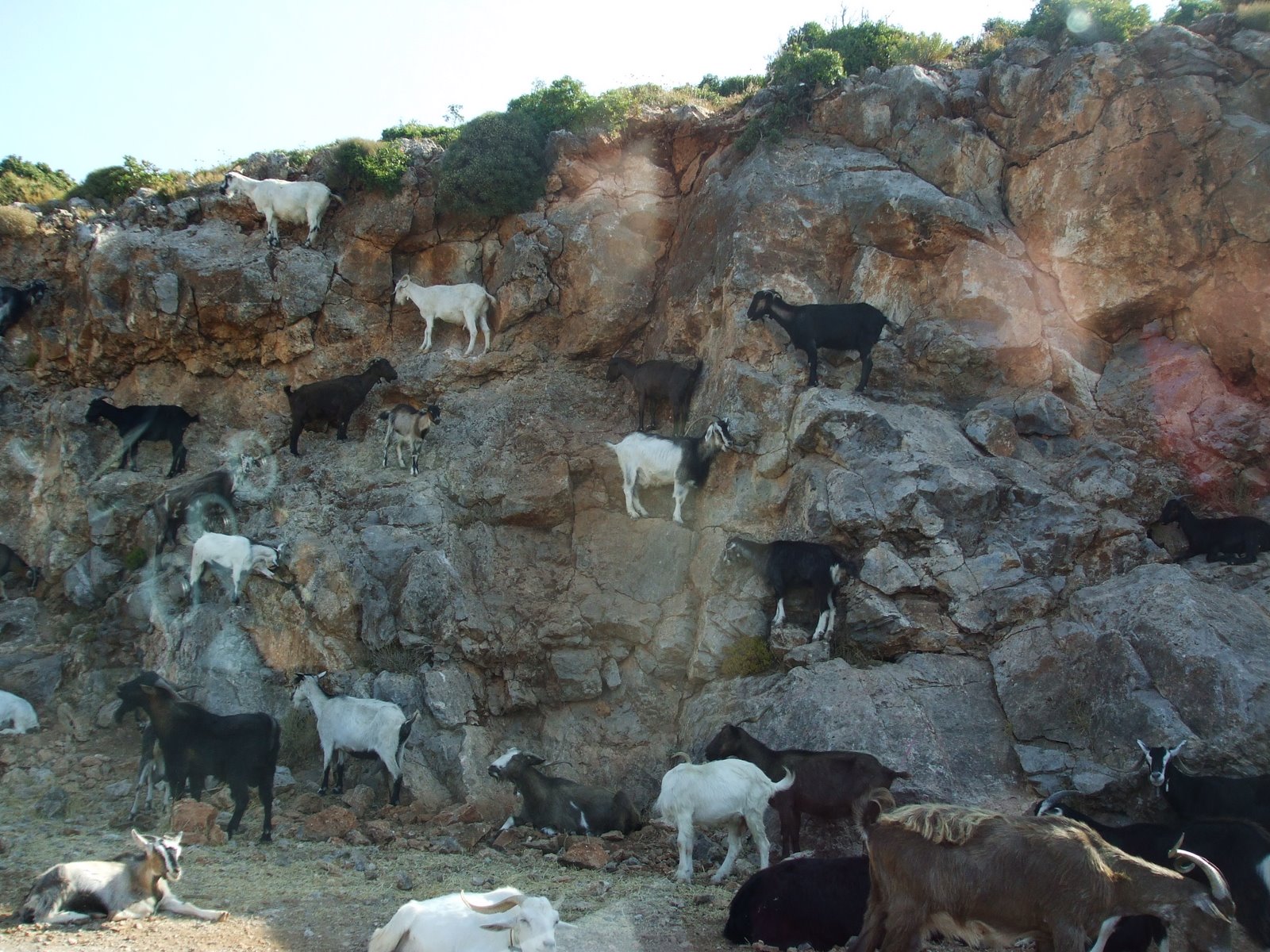 Finally we got back on track and reached Sparti and the small village next to it where Maria's sister lived. We stayed there a few days, during which the girls either spent talking to each other (and dragging me into it as much as they could, while I was trying to read the boring books I brought with me) or my sister in law spent at work and me and Maria sight seeing.

We first went in the city of Sparti to visit "Ancient Sparti". It was a big sign that directed us to it. It was a bloody park, a small one at that. Just a few stone looking modern roads, olive trees (of course), and some ruins, partly escavated and surrounded by do-not-cross tape. There were people that had parked their cars there, even their RVs! There was a modern contraption in the middle of it, something like a concrete electrical thing or maybe a janitor house, I don't know, full of graffiti. The only good thing that came out of this was a great view from above of the town of Sparti. 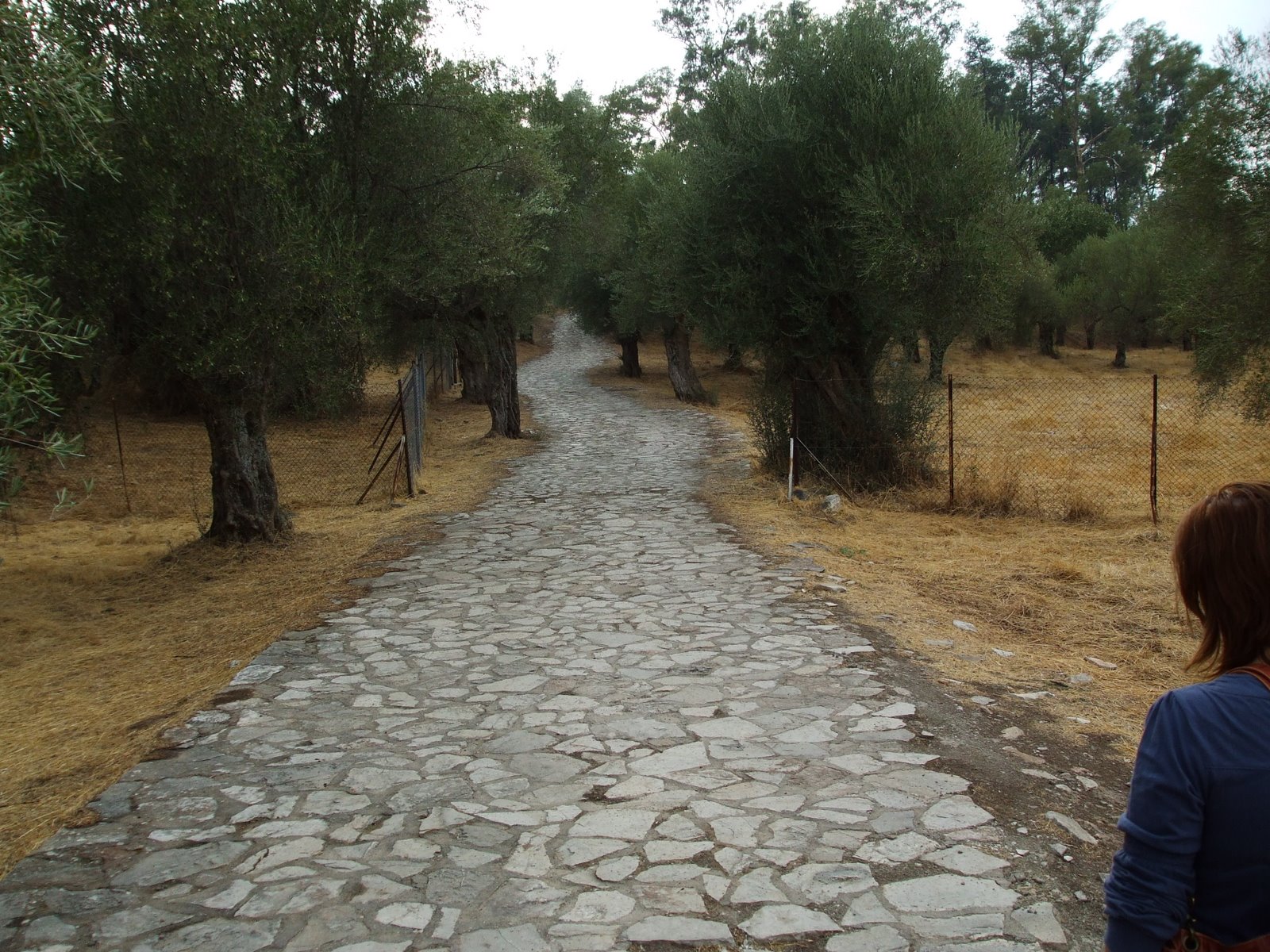 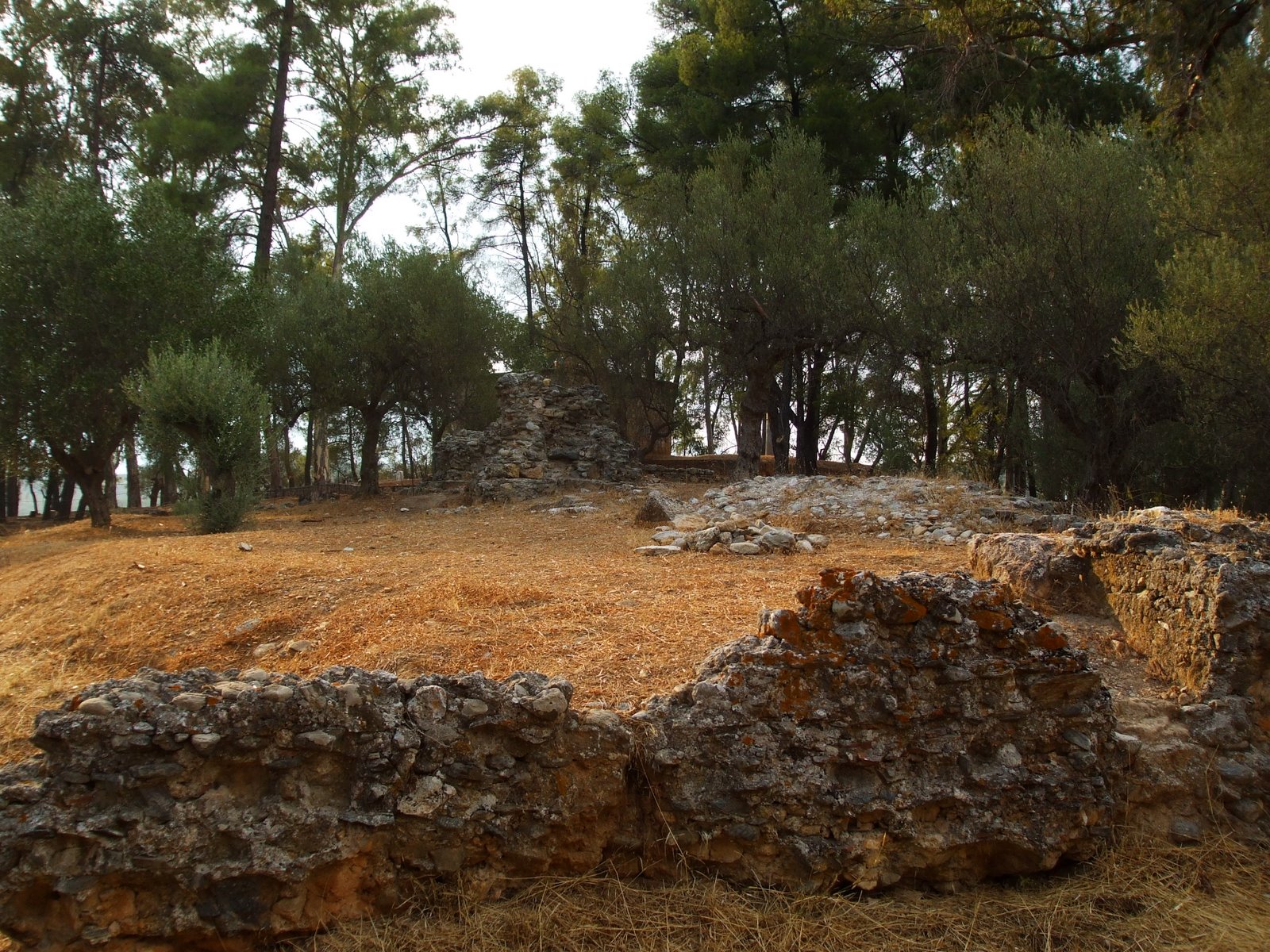 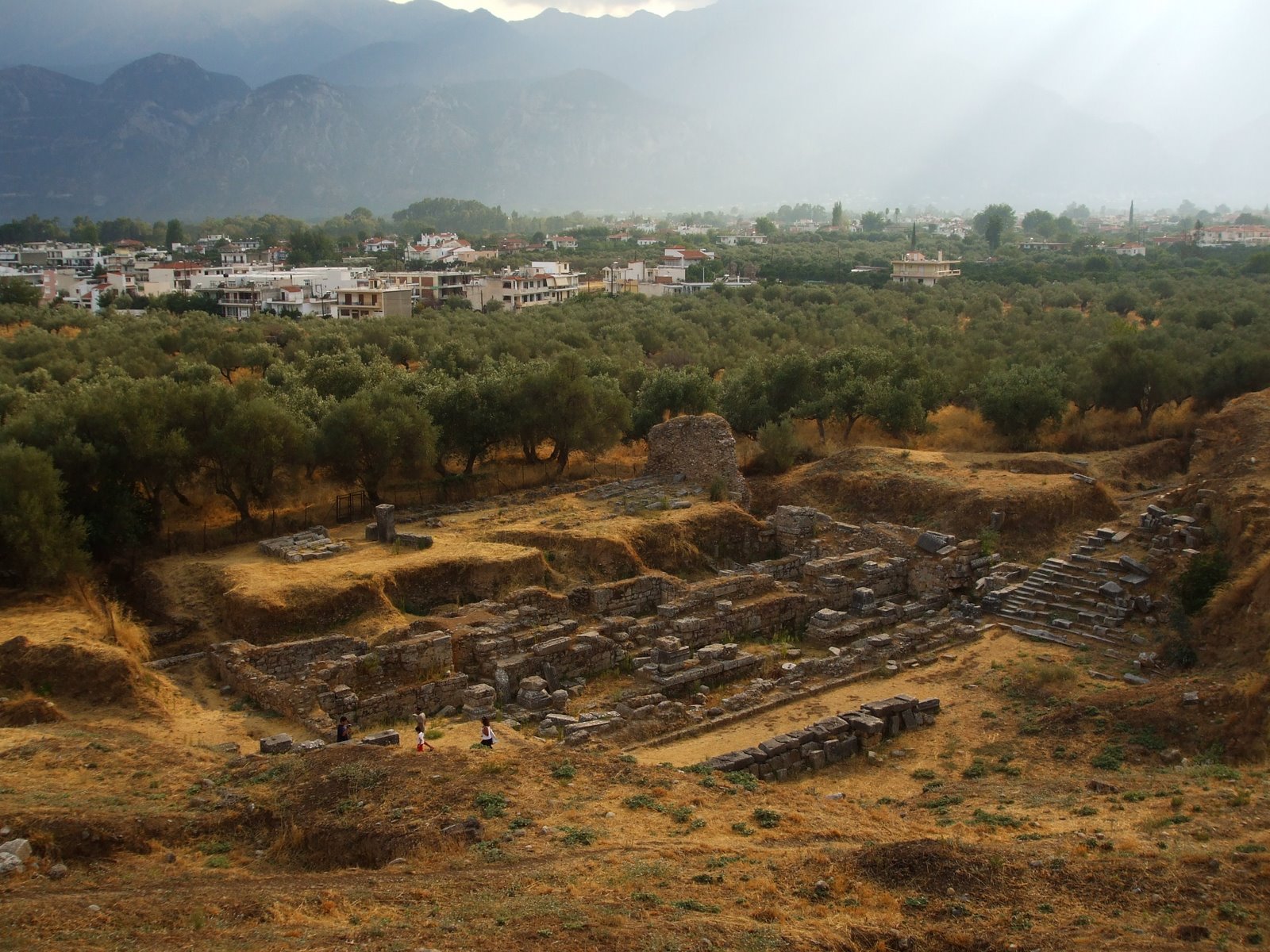 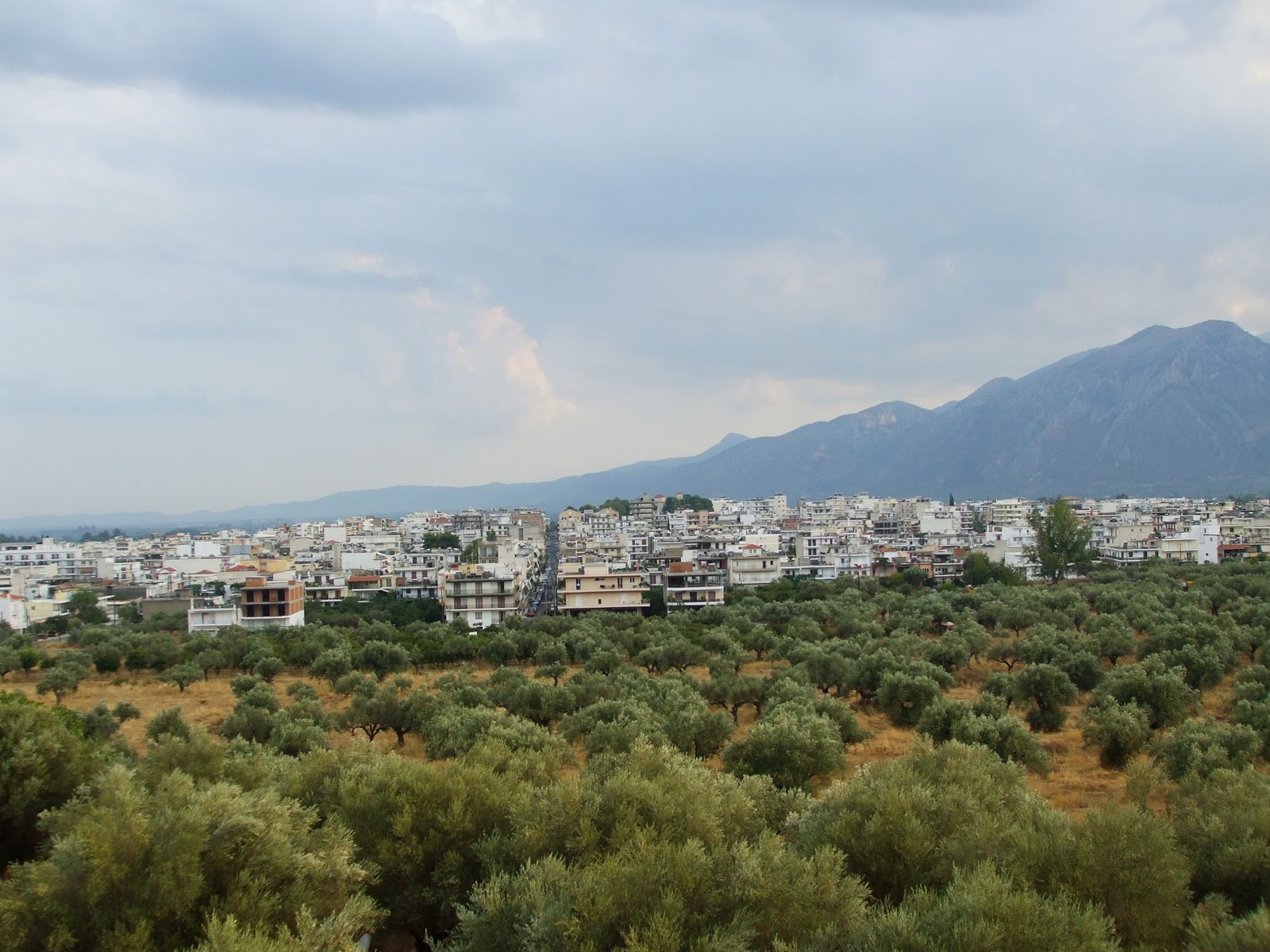 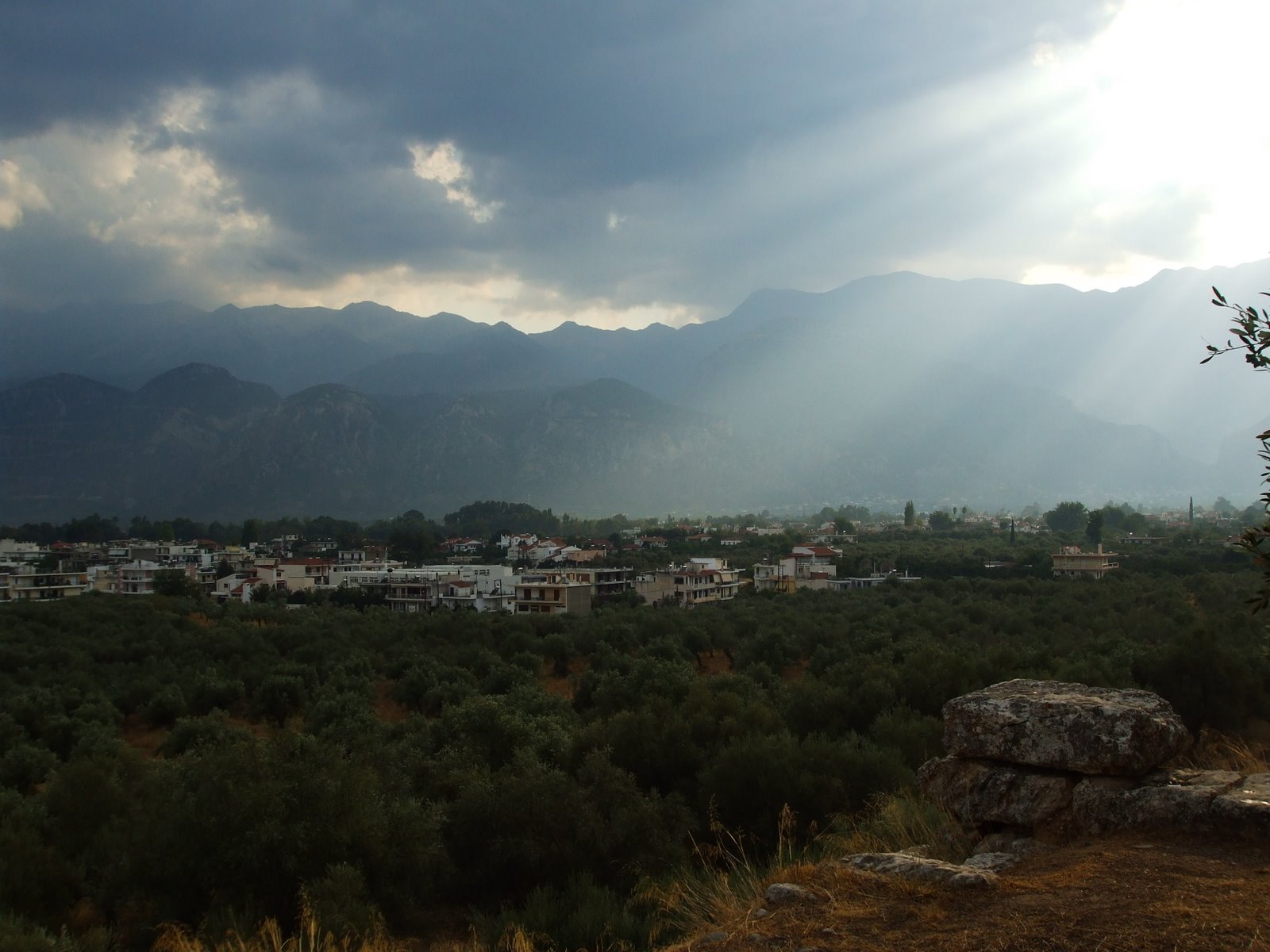 When we came back we took the car through the orange orchard from the back of the house and we found a goblin tree! Heh, just look at the picture, you will see what I mean. 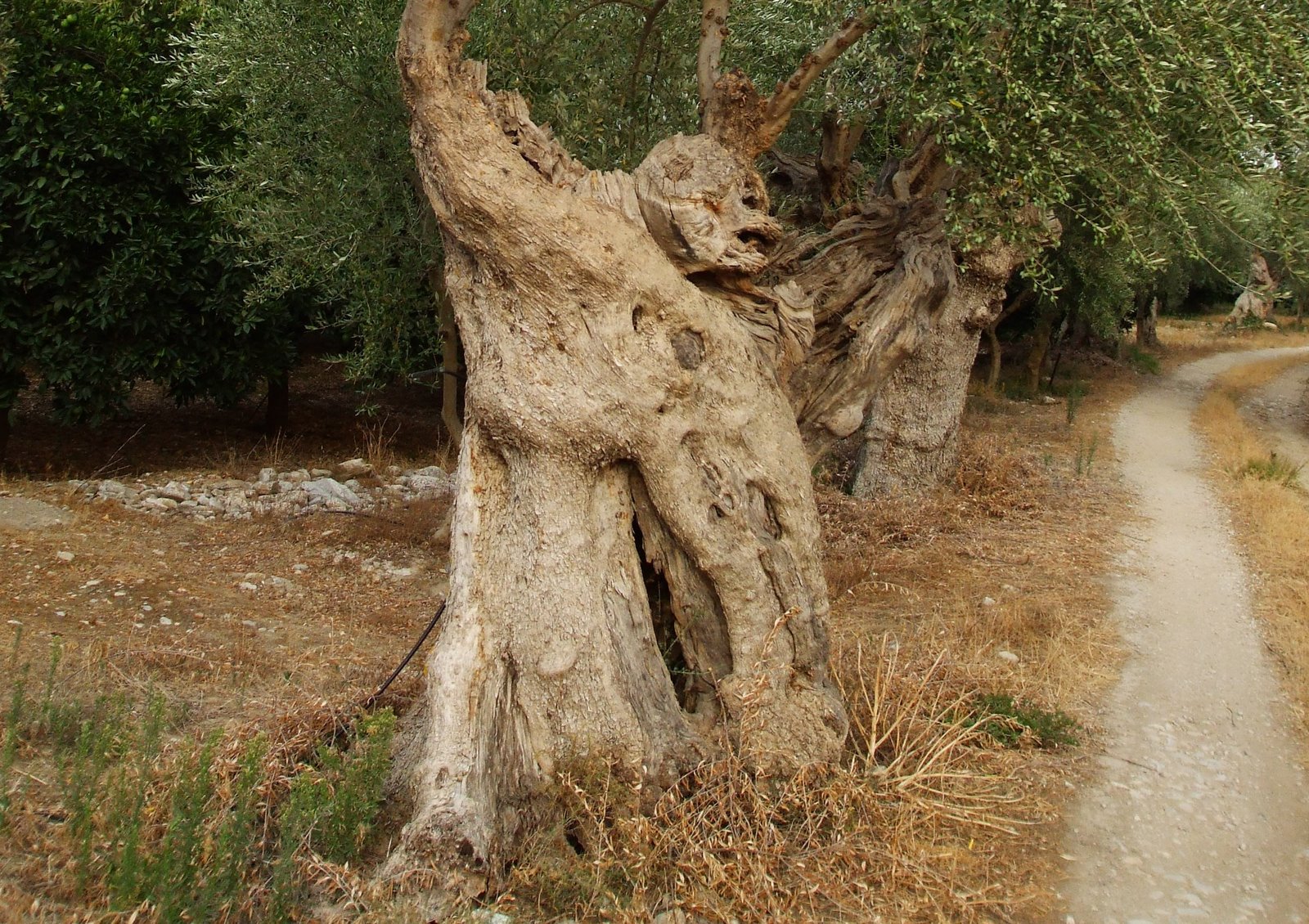 After that we decided to go to Kalamata, which is a rather large city in the south, taking first a mountain road that would take us directly, then return on a path that would follow the seaside and go around the mountain. It was a very nice trip. The mountain road felt like normal country for once, with actual green, non olive, trees and even rain! The towns on the edge of the sea were all nice, even if we only saw them from afar. In Kalamata, for example, we got lost trying to find the center of the city. There were signs for the center, but after following them, we would always get to the same spot, which was obviously not the center. On this trip we actually noticed vast regions covered with black ash. We theorised it was related to the extended fires that had plagued Greece the previous summer. But it could have been just as well new fires or even some weird agricultural system. 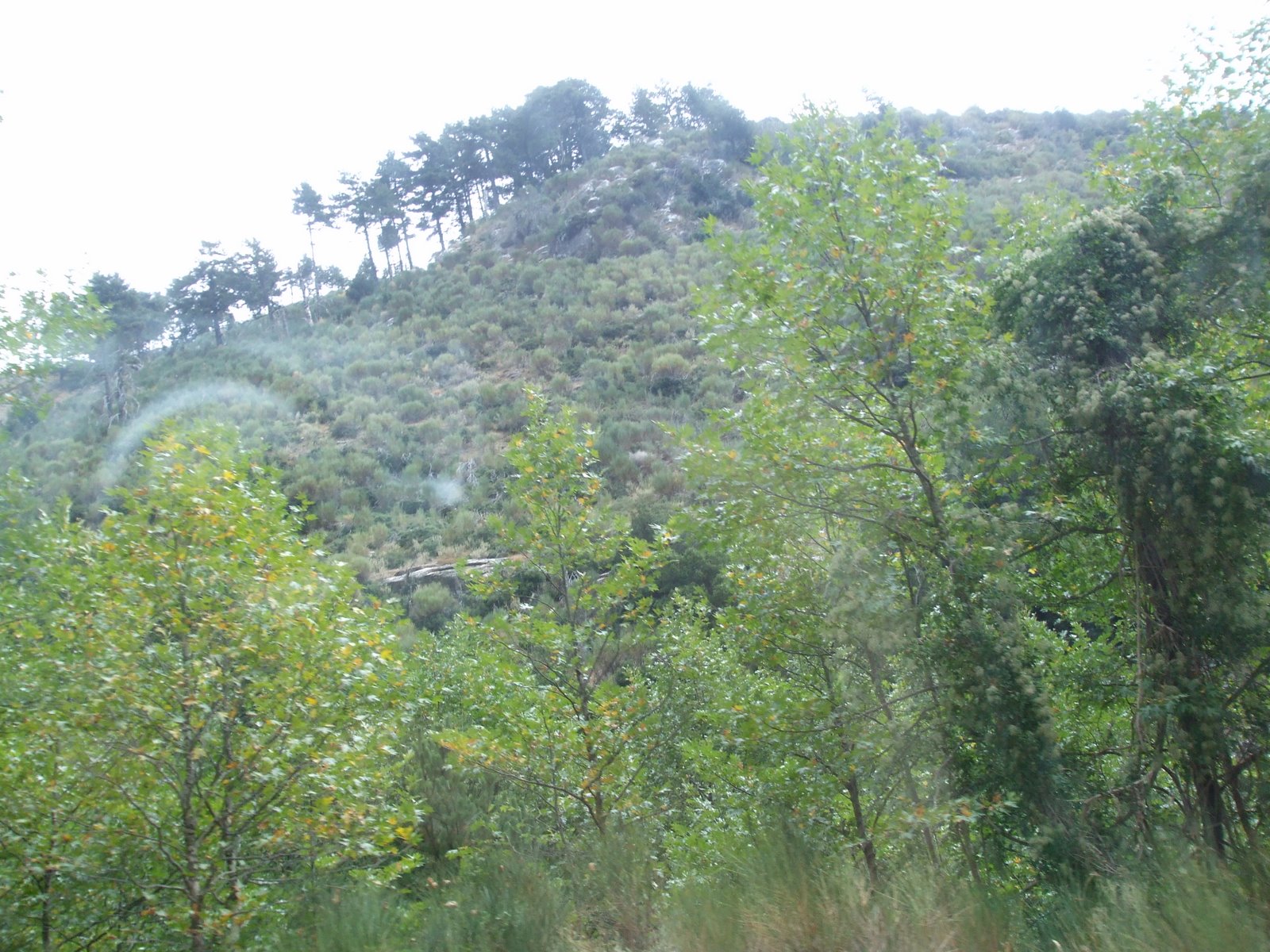 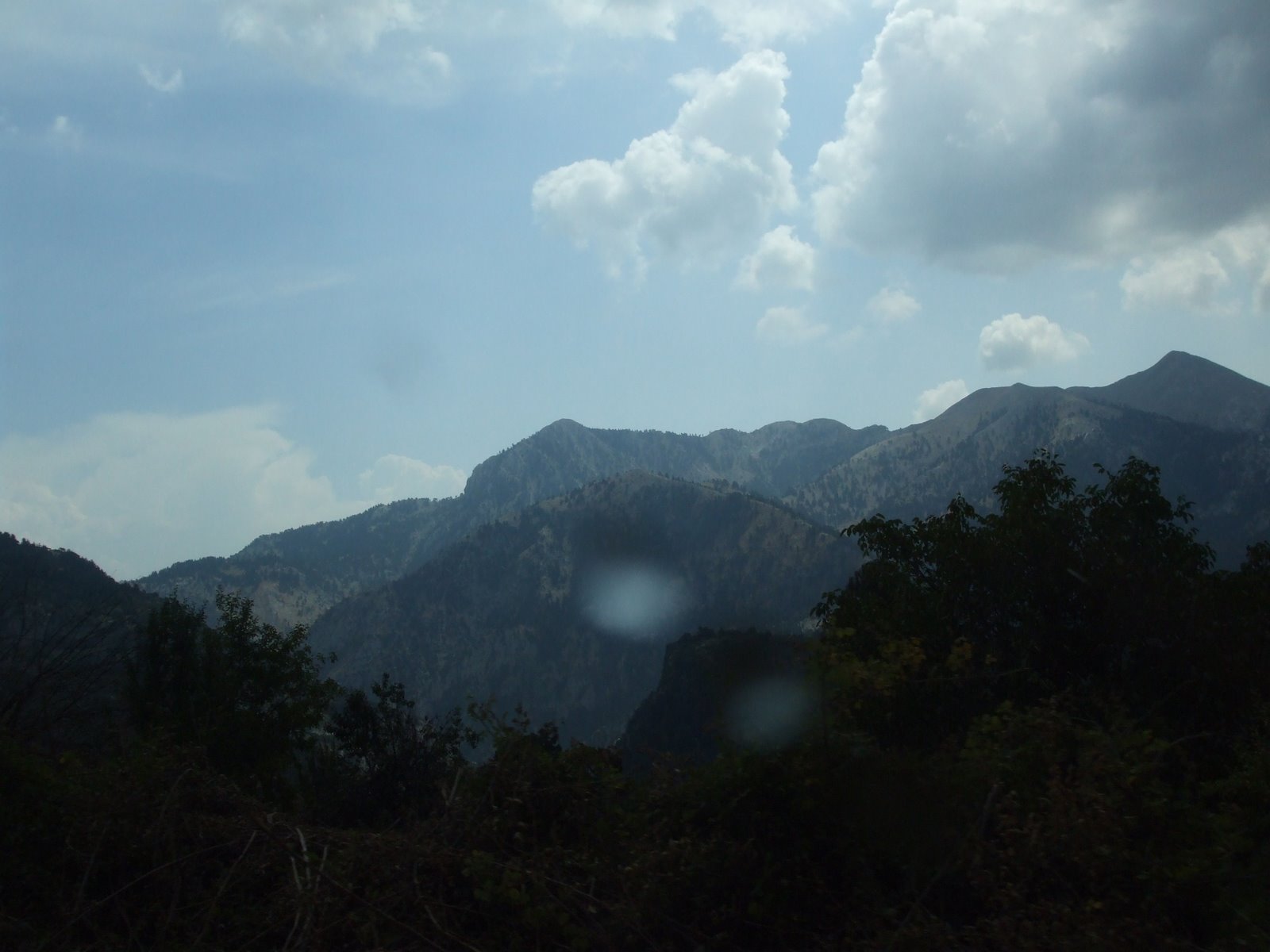 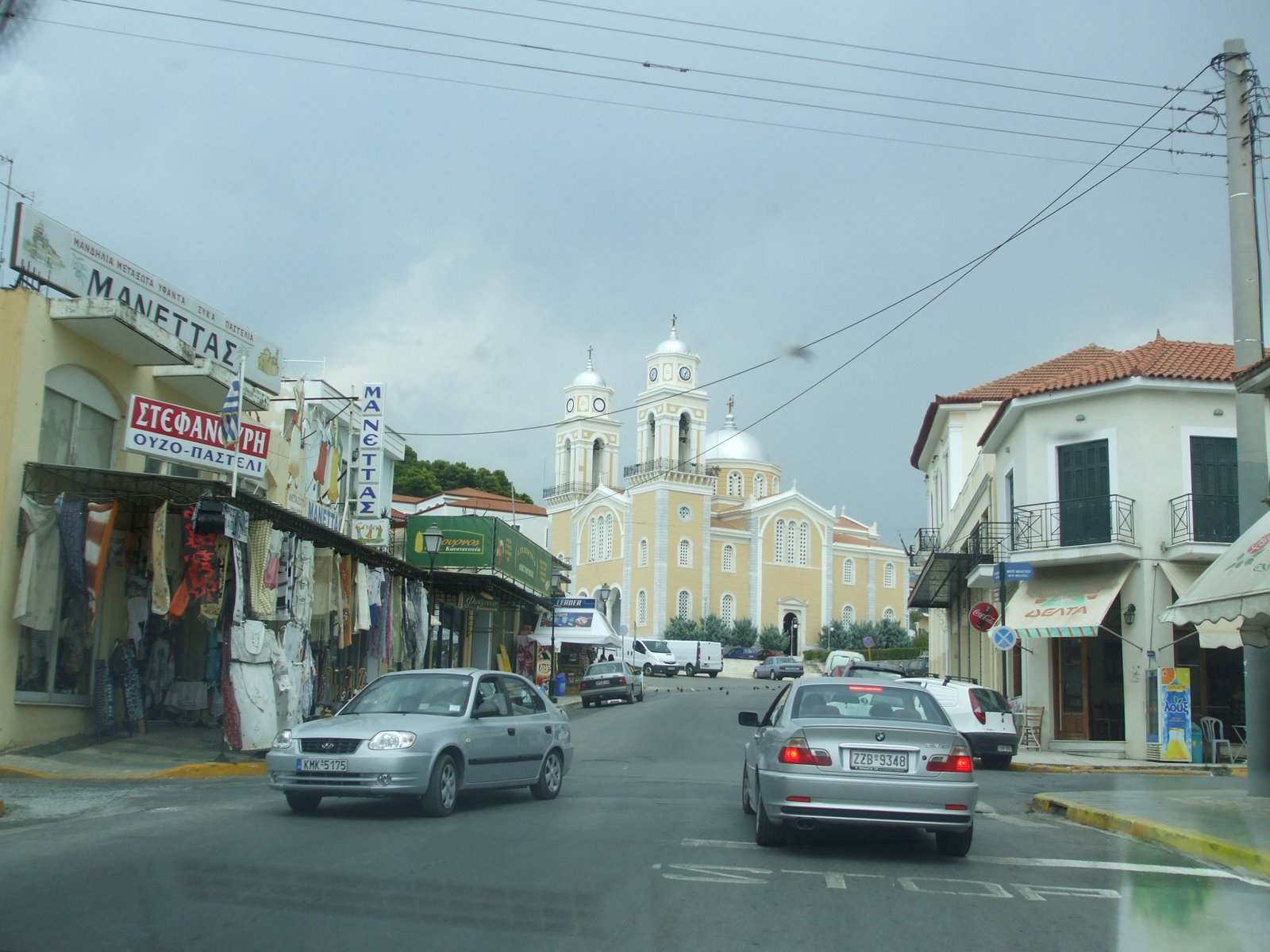 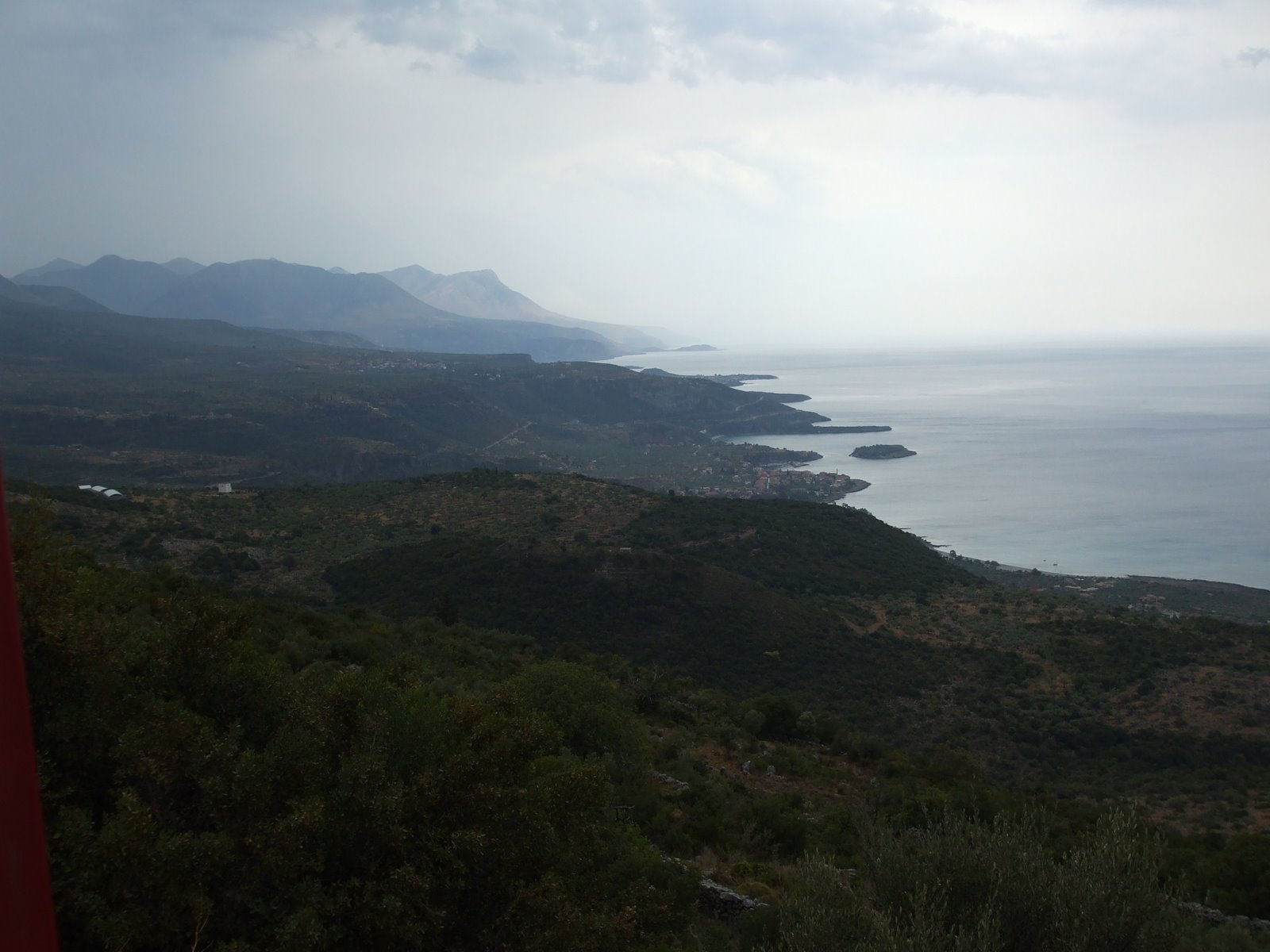 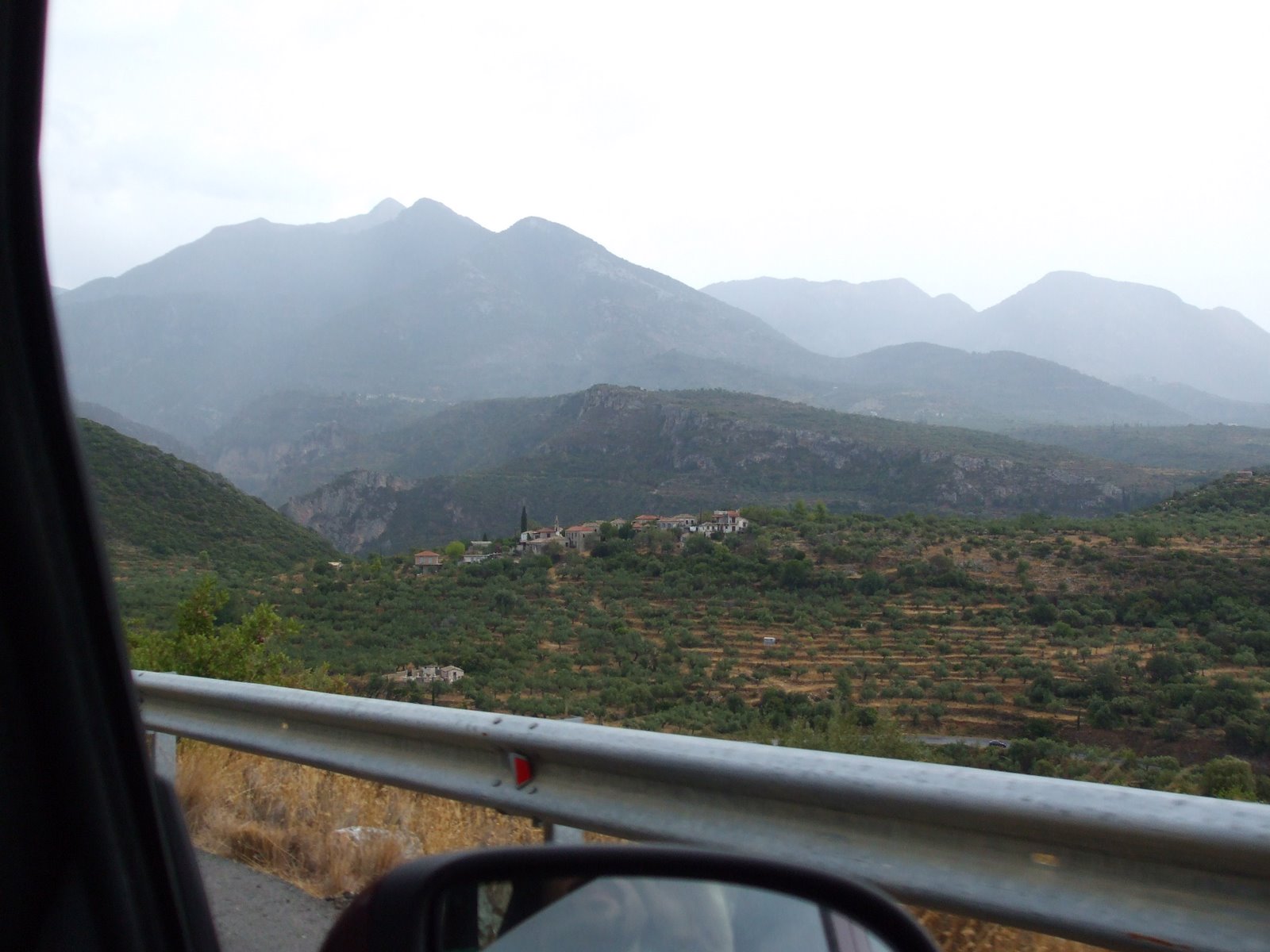 After the few days in Sparti we decided to go back to Bucharest. Again a night trip through Greece that would let us do Bulgaria during the day and reach home in the afternoon. This is were it got interesting. I told the GPS to take me home. Not only did I specify Bucharest, but the exact address. I then trusted it to take us there, without (as Maria would soon point out) actually checking the path. My only defence is that I am a software developer and I instinctively trust the electronics more than any paper map.

So, in the middle of the night, we found ourselves on a twisting road, dark and full of poorly signaled curves. Maria got upset immediately and asked me to look at the GPS. I did and I found out that the highway would take a large curved path and that the road that the GPS put us on was cutting that path. I did remember a setting on the GPS that involved road tolls. I thought the machine wanted us to avoid the tolls so it took us away from the highway. So I checked the setting off.

The road now went on another path. I could see that both previous and current path were taking european roads, but it didn't specify which was a highway and which was not. Maria was angry as hell and I was slowly losing my patience. I can stand hysterical shouting just as any guy, maybe a little better, but I do have my limits. I proposed to stop the car and look at the paper map and decide together on the path we want to take. Maria refused. So we went on.

At one moment I was actually reasoning that impulsive reactions (like swerving the car at high speed off the curve and killing us both) were usually an effect of low levels of serotonin, the comfort hormone. Both in animals and humans, serotonin is produces when the subject is caressed. So I actually caressed my wife, cooing her to close to normal levels of serotonin, when I almost felt like ripping her head off. Of course, that would solve nothing, since I can't drive (not to mention I am a rookie at ripping heads as well).

We passed through the town of Thiba, then we continued on a road that was nothing close to a highway. It was a good road, but not what we expected. The darn GPS took us from the highway because I checked that road toll setting off. Maria finally decided to stop and look at the map. The map showed us that the highway was 2 km from Thiba. We were already 20km away from it. But the small town where we stopped had two clear (albeit very thin) roads taking us directly to the highway. We inquired of the way to the highway to a gas station lady. She said that no, the only way is back to Thiba. So we went 20km back to Thiba, 2 km to the highway, 20km on the highway, where we noticed an exit to the small city we just left from.

At least everything went cool from that. It was good that we looked more attentively on the path home, since the GPS had prepared another surprise for us: it wanted to cross the border to Macedonia, then Bulgaria. I think that it would have been a more interesting road, but Maria insisted we take the known path through Kulata. Remember Kulata? Anyway, we got to Sofia, where the ring road around it was still under contruction!

After following a long queue of cars going at 4m per minute on dusty unmarked unpaved roads in the middle of Sofia, we got to the ring road again. It was under contruction there as well. So we stopped at a gas station and asked for directions. Bulgarians are different from Greeks. When they say they know a little English, they actually mean they don't know some of the words, not they just know a few. They were nice, showed me where I was on the map, where I should go to exit Sofia and reach the road to Ruse (the border town to Romania) and they even gave me a Bulgarian map. I told them I have no money to pay for it and they gave it to me anyway! I gathered that the map costs less that 5 euros + the repairs to the cracked lateral mirror, but still it was amazingly nice of them.

Then we got to the road to Ruse. This time, the GPS took us on another road that had no more 40 and 60km speed limit signs. I was glad to see it, especially since Maria had exclaimed "oh, now we get on that boring road" only minutes before. I was thus surprised to hear her complain the entire way to Ruse that it was NOT the way we came on when going towards Greece.

And that's about it. We got home, I started writing all this, I enjoyed my last 4days of freedom before going to work, answered my emails, I couldn't believe the people leaving spam and messages on the blog DEMANDING work done for them, etc.

<p>I could relate to the last bit you said. I was on vacation for the past 10 days, and people would just not get the hint that I'm not answering questions and responding to demands no matter how many times they ask or post.<br><br>In any case, I enjoyed reading your trip notes and the photos. Sounds like you have a lot of patience and good humor, which is so necessary for traveling and having a good time in spite of companions or mishaps.</p>