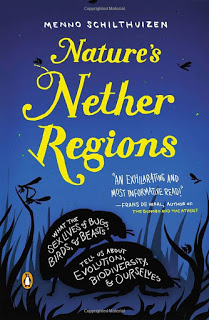 I guess when your main work concerns the sex organs of animals, you have to own a healthy sense of humor. That is why, even if I wasn't terribly interested in the subject, I continued to read the book mostly because of Menno Schilthuizen's writing style. This book - full title Nature's Nether Regions: What the Sex Lives of Bugs, Birds, and Beasts Tell Us About Evolution, Biodiversity, and Ourselves - kept being funny and captivating, despite being about a niche subject treated in a very scientific way.

But having read it, I don't regret a thing. There are a lot of interesting insights to be drawn from the book, things I wouldn't have probably thought about for myself. The focus is on sexual organs - mostly in invertebrates, but not only - an area that is both fascinating and rarely explored in a rigorous fashion. Why are they so important? Because in almost every species they are changing from generation to generation faster than anything else. Many species that basically look the same, having evolved in the same particular niche and maybe even from common ancestors, have wildly different genitalia and strategies for impregnation, an intriguing fact that leads Schilthuizen to explore the theory of sexual evolution, in other words changes determined by the choice of partners. You know, like the Pompadour hair style...

Forget human sex, or even mammalian sex. It's spiders, insects, worms and snails that will amaze you with the weird and kinky adaptations in their romantic lives: females that store the sperm of various pretenders and only use the one from the guy they liked most, spoon like penises used to scoop out the sperm of rivals before climax (humans have this, too, BTW), complicated female organs and mechanisms meant to thwart male attempts at forceful insemination and males who choose to stab their mates and short circuit the whole thing. Oh, and did you know snails are hermaphrodites? How does that work?

Bottom line: a very well written little book that may surprise you both through how entertaining and interesting it is. No, a penis is not just a syringe and a vagina not only a hole that accepts anything you put in it. In this book you will learn why, how sexual organs evolved and, indeed, continue to evolve faster than any other organ in most species.