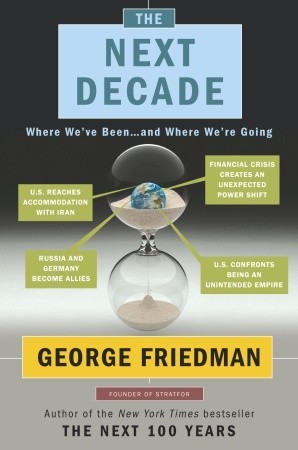 I started reading this book at random, and by random I mean I used a tool to choose it for me. And what a coincidence that, published in 2011, it talks about the geopolitical and economical drivers that would shape the next decade while I read it in 2022, as a conflict between Russian and the U.S. in Ukraine is looming. Was Friedman a sort of Hari Seldon and he predicted it all or was it all just bull? Well, a bit of both.

The Next Decade wants to be a U.S. centric but objective dissection of the world, all pretenses aside, with the goal of predicting what will happen and what Americans should be doing about it. George Friedman starts by explaining why the United States have become an empire, almost by accident, and that while the reality of the fact cannot be denied, the anti-imperial principles upon which the nation was founded as still relevant and even essential to the wellbeing of America (and hence the world). He decides that the most important actor in this story is the American president, the modern embodiment of both the principles of the nation and of a Machiavellian prince. The rest of the book is a continent by continent analysis of what countries are driven by and will do and what this prince has to do to ensure and promote American supremacy over the world. In the author's view, the highest virtue of a good leader is to act in the best interests of his nation, while attempting to follow a moral code as well as possible in the circumstances.

Does it sound arrogant, pompous and presumptuous? Yes, quite. But does it also sound close to how heads of state think and make decisions? A resounding yes. In fact, his talk of the Georgian conflict, where Russians invaded and Americans wrote some stern condemnations in response is terrifyingly close to what happens now in Ukraine, only the U.S. cannot afford to repeat that performance now.

In order to understand this office I look at three presidents who defined American greatness. The first is Abraham Lincoln, who saved the republic. The second is Franklin Roosevelt, who gave the United States the world’s oceans. The third is Ronald Reagan, who undermined the Soviet Union and set the stage for empire. Each of them was a profoundly moral man … who was prepared to lie, violate the law, and betray principle in order to achieve those ends. They embodied the paradox of what I call the Machiavellian presidency, an institution that, at its best, reconciles duplicity and righteousness in order to redeem the promise of America.

Friedman thinks, for example, that bin Laden forced the hand of the American president to overextend in the Middle East, a pointless military gesture, but a politically necessary one, which lead to a rise of Iranian influence and distracted from Russia. As in The Next 100 Years, the author is still obsessed with the importance of Mexico, Poland and Turkey, but he adds more stuff related, for example, to Romania, which must be built up militarily so that it defends the Carpathians for the Americans for free. The European Union is a joke, fractured by history, culture, economy, financial systems, laws and held together by a fairy tale ideal of a bureaucratic world where war (inevitable to Friedman) doesn't exist. But even so, Germany must be stopped from joining up with Russia and as best as possible removed from its alliance with France. Africa is a place that the U.S. should just ignore. And so on and so on. Basically, America should make sure that in no place will any power even begin to rise in a region because it would impede its natural right to rule the world.

The scary thing is that every one of these predictions or analyses are propped by well explained and documented arguments. It's not that Americans are assholes for doing that, it would be costly and stupid for them to not do that. As Friedman puts it, the U.S. has become empire without intention and is now forced to act as such for better or worse.

I must warn you that this is not your school history book, where valiant heroes defend their homeland against evil, but a very cynical overview of how foreign policy is done. It describes a world in which every country is at war with every other country and any sense of morals is slave to necessity and only serves to bring a modicum of validation to the inevitable evil nations do.

Bottom line: a very well written book, extremely apropos these days, something that I urge to be taken with a grain of salt, but highly recommended as a read.