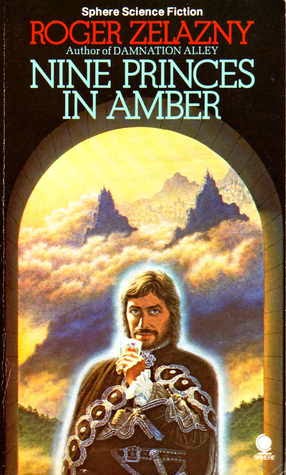 Nine Princes in Amber describes a world in which only one place is "substance", the great city of Amber, while all others, including Earth, are just "shadow". Roger Zelazny doesn't really explain what is the difference, but we catch glimpses of the way Amber people can alter reality and that some of the things that happen in shadow cannot happen in Amber. Gun powder, for example, or perhaps even electricity. Great power can be channeled through tarot cards that hold the images of the children of Oberon or some other things, former king of Amber, while his numerous sons and daughters scheme and plan to take over the throne. The cards are drawn by a weird magician that seems to hold no political power, despite his amazing skill.

I took advantage of a flu that restricted me to bed in order to listen to the book in audio format, narrated by Roger Zelazny himself. While I enjoyed it, I didn't feel it taught me anything new. It was a pretty inconsistent story, as well. Princes and princesses and nobles, acting all smarty and aristocratic, dueling with swords and the occasional bow or crossbow, and some of the classic cliches encountered in this sort of context: like never killing your noble opponents, but imprisoning them or torturing/displaying them in order to demonstrate power.

In the end, the main protagonist remains a mystery. He starts with an amnesia, but soon he recovers his memory, making the entire memory loss kind of pointless. It is never quite spelled out who he is as a person, or what was it that he did on Earth. In truth, the book feels more like an introduction to the world of Amber, more like a teaser really, leaving the exposition of real character or description of the worlds to the following books. It is one of the first books from Zelazny, so maybe it will become better in the future. It is not explained why someone would want to rule Amber, either, as any other shadow world looks more appealing.

Even if I haven't fully enjoyed the story, I did promise a friend I would finish the entire Amber series, so we will see. After finishing it, I reserve the right to torture my friend in order to display my power by making him read something truly awesome and unsettling. I have not yet determined what yet, but a dark bird of my desire will carry my message and he will live in fear.

Zelazny himself died in 1995. I found a page written by George R. R. Martin, a beautiful remembrance of a mentor and friend. Apparently, he wrote the character Croyd (The Sleeper) in the Wild Cards series, one of the most interesting characters and appearing in many of the stories, even if very rarely as a main protagonist.