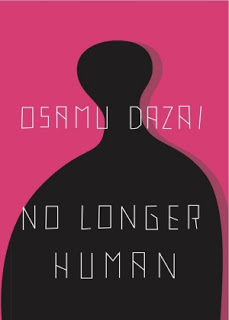 I read this short novel from start to end in under a day. Osamu Dazai writes from the point of view of a sociopathic young man who cannot seem to understand the human condition and fears all people around him, mostly because he expects to be found out at every moment. The title of the book can be translated in several ways, the English one relates to the protagonist's feelings of losing one's humanity, while the literal translation reads as "disqualified from being human", implying a societal judgement. Imagine a Japanese version of The Stranger, by Albert Camus, and you get a good picture of the plot and feel of the book. Both books were written in the same period, more or less, but while Camus probably imagined the character, many believe Dazai was talking about himself - he committed suicide soon after.

No Longer Human is the second best rated Japanese book and was adapted in movie and manga. It is difficult to imagine those being better than the dry accounting of the inner turmoil of the character, starting as a little boy who devises "clowning" as a method of passing the test of humanity, outwardly fun and good natured and inwardly terrified of being discovered as a fraud and punished by the society of strange human beings that he cannot understand or empathize with. I highly recommend it.