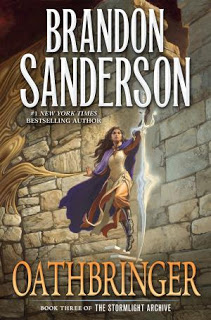 Just after finishing some mediocre books from Brandon Sanderson I started with Oathbringer, as if to remind me why I like this author so much. As Lift would say, the book is awesome! It's not without its flaws, but it is a mammoth in size, great in quality, epic in scope.

The third book in The Stormlight Archive, ambitiously planned as a ten book series, Oathbringer focuses more on Dalinar Kholin rather than Kaladin, who one might think was the main character of the series. Yet it also expands the characters already introduced and brings even more. There are histories that explain what is going on: the Voidbringers are back, another Desolation has begun, Parshendi will become agents of chaotic destruction under the control of mighty Odium, their god, who wants nothing more than to bring the end of the world, and the only hope comes from Heralds, Knights Radiant and people united against their common foe. But is that what happens? Who are the Voidbringers, really? Why are parshmen awakening, but instead of agents of destruction most behave like normal people who have just woken up from stupor? Are the Radiants united under the same purpose? Are they even the good guys? Where are the Heralds and who among them are still sane? Who's god is Odium and what does he really want? And when spren become corrupted by one god or another, what happens when you bond one? All these questions make for not only a good exciting read, but an intelligent one, as well. I felt the adventurous reader, the engineer and scholar in me all enjoy the book.

As for the bad part, the book is, as were the others in the series, quite large. Maintaining pace, or indeed even pretending there is one for the entire book, is impossible. Some parts are bound to bore, while others to annoy when perspective inevitably switches away from them. Sanderson paints each character as the hero of their own story, creating understanding and compassion for almost all and bringing them up and down as the story progresses, and while this is a worthy goal and a mark of a good writer, it takes a toll on the reader who would rather just root for the good guys. Probably worse of all, the next book in the series is optimistically planned for 2020, which means another two years of yearning for the mere continuation of the story. It is a book that feels more wide than it is long and waiting for fifteen years for the series to end so one can read it all it is not manageable either. So yeah, my biggest complaint with Oathbringer is that it is too good.

I loved the Reckoners series and Elantris. Funny enough the Mistborn series that Sanderson is known for threw me away and some of the recent attempts like Legion felt just bad. Yet The Stormlight Archive is a series I can get behind and invest in its characters and enjoy. Oathbringer is just a part of it, but a good part. Bring on the fourth shard of the story, Brandon! I need to unite them all!