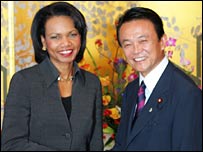 This is an image from the BBC web site and the title of the BBC article is Rice launches Korea crisis tour and the caption is Japan and the US pledge to work on implementing sanctions on North Korea, the US Secretary of State says.
I knew politicians are assholes, but how can you smile like that while deciding pledging to impose sanctions on some other nation? Look at her! You'd say she's hugging her daughter while petting the cutest cat ever. And she's imposing sanctions! And the title sounds like she has just opened a tourist resort. That whole picture is wrong. Geez!