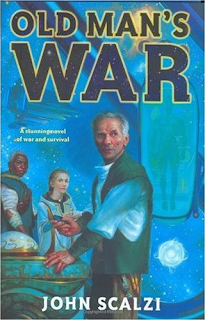 Old Man's War is the first book in a space opera series that spans five books (at least at the moment). People recommend it highly and I do have to admit that it is well written, with an easy going style that is also well read. John Scalzi is not trying to create the perfect world, with details that always make sense and with crushing emotional depth, though. The book is something that you can finish in a day or two, with no sleep lost on what the characters are going to do next. For a while it did remind me of the excellent, if repetitive, Seafort Saga, by David Feintuch, but while that series felt dated because it was inspired by the British navy and was written in 1994, Old Man's War was written in 2005 and had no real reason to, but it did. If you haven't read Seafort's Saga, especially Fisherman's Hope, the fourth book, I would recommend it over this.

What is it Old Man's War about? Well, in the future, old people from Earth are joining the army when they are close to death because the CDF, or Colonial Defence Force, has the technology to rejuvenate them in exchange for a limited conscription. I won't spoil for you the exact method, but let's just say that it has a lot of logical problems that are compounded by the concept of the Ghost Brigades. So you have this main character, a funny old fart that joins at 75. One can assume that in the future 75 old people are still humorous and reasonably mentally and physically fit, as opposed to now, but even so, Scalzi was 36 when the wrote the book. What made him feel like he could pull off a character twice his age, with all the wisdom and particularities one gathers at that age? In my opinion, he rather failed, as John (why do people use John as their leads in books and scripts? Is the name really that common in the US? I have to admit that Lost ruined that name for me. Every time I hear about a guy named John I hear the phony people in Lost intone it with grave meaning while they're saying absolutely nothing important. Arrgghh! Anyway...) comes off closer to the writer's age (and having the same name, too). I might even have an issue with the title, since John is an old man for a third of this first book and then he's young and fit.

The rest of the book is about how he intelligently and valiantly rises from the rank of corporal (which he earned in training in an equally smart way) to captain in a few months and has a series of unlikely events happening to him (and here I am not making a pun of their explanation of "skipping", either). He makes connections to some people, which the writer attempts to infuse with meaning, but somehow fails, as when some died I didn't feel anything. Scalzi gets it right towards the end of the book, but then the book ends, and ends in a less satisfactory manner than I would have expected.

To summarize: I will probably read the next books to see what happens. However, it does seem a bit too light, too rational (in writing style), to make an impact. I do feel that John Scalzi has a lot of potential as a writer, but that somehow he misses the emotional component necessary for a book to "click" with the reader. On the other hand, I've seen a lot of rather failed first books that only led to the writer blossoming in the following publications. I do hope that's the case here. The fact that Paramount Pictures optioned the book in 2011 only shows it is rather shallow, as the really deep ones never make it to film. This doesn't mean I didn't have fun reading it, but most of the time I waited for something to happen. I felt that everything was a setup for something grand. When the book ended I was a bit shocked, as I thought I was in the middle of the story at least and still waiting for that big thing to occur. It's not a hard sci-fi book, it's not a personally jarring one and it is not a military heavy story. The obvious bias towards the human hero makes it all feel surreal.