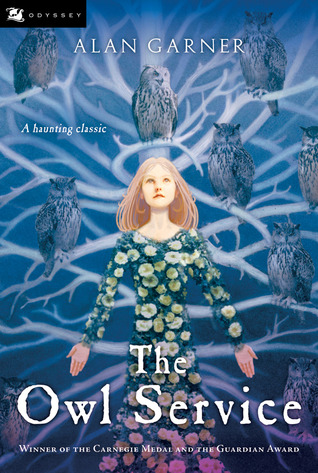 I don't remember why I thought this would be a good book to read. Perhaps because it was one of those "gothic novels" and I had just read one that I liked a lot. The Owl Service is a short novel, but it took me ages to finish it. Whenever I had the time to read/listen to it I always found something else to do. I think Alan Garner wanted to do right by the story, which is a reimagining of a traditional Welsh legend, but it ended up an opaque and pretentious mess with characters that you cannot stand. If at least the writing had called to me. Garner is not a bad writer, but the style of writing didn't capture my attention. I had to make efforts to stay in the story and not let my mind wander.

The plot revolves around a valley in Wales where a British family owns property and where the locals are treated as uneducated peasants. The family comes to spend the summer and weird things start to happen. But they are either completely random or, when it comes to be some sort of possession or empowerment, there is always someone near to break the spell or destroy things in fear and righteous anger, which made it all rather boring. At no point there was anyone saying "Oh, that's peculiar, let's dig into it!" or "Hey, I can make books fly by themselves, let's see if I can solve world hunger or space exploration".

The worst part was the characters, all entitled twats. Every single one of them believes he can order other around, force things upon them or do and say whatever the hell they want. And I mean everyone, including the Welsh help. If they don't insult you, force things upon you or treat you like scum just because you are different, they smack you upon the head with indignation for not having done what was rudely ordered to you. And that's the maid doing it!

Bottom line: as a scholar of Welsh legend and the literary interpretation of myth in British literature I... hell, no! Just leave this book be! It's just bad.