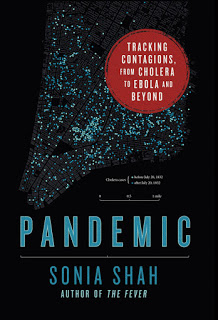 After I've read Barry's The Great Influenza I had resigned myself to never read a book as well researched, as interesting and as viscerally informative, so when I started reading Pandemic, by Sonia Shah I had low expectations. And the book blew me away!

While I did notice some factual errors along the way, stuff that was either insufficiently researched or used for dramatic purposes, Pandemic was amazingly good. And terribly disgusting. If Barry took the high road of celebrating the heroes in the fight against pathogens, Shah writes so that every chapter destroyed more and more of my fate in humanity. By the end of the book I was rooting for a disease that just comes and kills us all to spare us the embarrassment of being human.

I mean, the investigation starts with cholera and the undignified way in which it makes you involuntarily squirt every liquid you have until you look and feel like a desiccated corpse and if you don't die the chances are people will confuse you with a corpse and bury you alive. But then it got to the horrid conditions that existed before the 20th century even in New York, a place where the population density exceeded that of modern Tokyo five times and people would wallow in their own excrement thrown in the streets and infesting their water supply. Then it described an epidemic of cholera in such a hellish place; can't get any more disgusting, right?

But wait, then there is a chapter on corruption and how financial interests caused the death of thousands just so some people can build a bank corporation like JPMorgan Chase, the biggest US bank today, built on literally feeding shit to people until they died. Diseases not allowed to come into the public eye for the sake of tourism and all that crap. Can it get worse? Yes, because once the disease is there, the blame game is on. The cause of the disease is not germs, the blame is not on a corrupt medical or political system, the fault lies solely on dirty immigrants, gays, minorities and if all else fails, the aid workers that are trying to help, but probably brought the contagion themselves on some sinister agenda.

And then we get to the point where we learn our brilliant present is based just on the ignorance or indifference to present dangers or current super bug pandemics. After all the horror the book presents, the end result is but a whimper, business as usual, ineffective uninformed lethargic reactions to attacks that started decades ago and were completely ignored (pooh-poohed, to use Shah's expression, alarmingly suggestive of choleric excrement). The science is way better, the attitudes remain pre 19th century.

I feel like The Great Influenza, Pandemic and I Contain Multitudes are three books that need to be read together, like a pack. Followed or perhaps preceded by Sapiens. I know, these are all books I've recently read and there are probably hundreds more that could join a list based on topic, but to me all of these stories clicked like puzzle pieces and opened my eyes to a complete picture.

In conclusion, I highly recommend reading Pandemic. It's good for the people in the medical field, it's good for people that couldn't care less (they will after reading it), it's a must read.