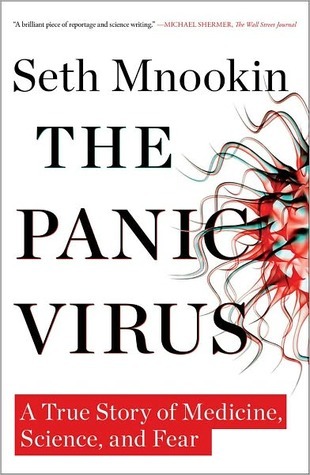 Almost a year ago I was reading Vaccinated, by Paul A. Offit, an ode to vaccines and their de facto promoter in modern medicine, Maurice Hilleman. Offit was angry in the book when talking about the vaccine craze started by Andrew Wakefield, a self interested psychopath that gained money and fame while feeding on the fear and desperation of parents. Yet, he is not even close to how angry Seth Mnookin is in The Panic Virus, a book dedicated solely to exposing the roots and mechanisms of the industry of fear towards vaccines.

The author systematically dissects, with proof and careful analysis, the entire argument of harmful vaccines causing autism, mercury poisoning or damaging immunity. Let me be as blunt as he is: the theory that vaccines cause autism has been thoroughly debunked and whoever continues to spout such nonsense has not read anything about the subject other than Facebook. Mnookin talks about Wakefield, David Kirby, Jenny McCarthy, Oprah Winfrey, exposing them for the profiteering promoters of deadly lies that they are. He talks about law trials and medical trials and research papers as they destroy any leg these theories stand on, but which never reach the news. He talks about devastated families, tricked into wasting their lives and money championing harmful ideas just for the tiny hope their child might get better.

However it is ironic that this book suffers from the same problems that made the vaccine argument lean so much towards the emotional, dramatic, sound-bite sized bullshit: it is technical, precise, verbose, intellectual. It is difficult to read the book because it engages with your brain, assaulting it with educated language and loads of information. Meanwhile, the opponents of the Mnookin's views use animated gifs with large colorful font texts and the occasional kitten. But it is a book that needs reading.

Consider The Panic Virus as a form of vaccine itself. You need to read it so you don't fall prey to soulless predators that would use targeted well crafted yet completely misleading arguments to sway you to their side for their own profit. I am warning you, though, this is not a happy book. It made me question the worth of the human race as a whole. If such cheap techniques can be so effective in brainwashing so many people into believing absurd lies, then don't we deserve it, all the death and suffering? Aren't we failing at... I don't know, evolution? And the sad part is that most of the affected are fairly educated people, who start to rebel against "the establishment" and branch out into alternative theories without actually employing any technique of differentiating between fact and fallacy.

Bottom line: I will rate this book the maximum value, because it is important to be read, but it is not a perfectly written piece of literature, nor it is easy to finish. But give it a try.