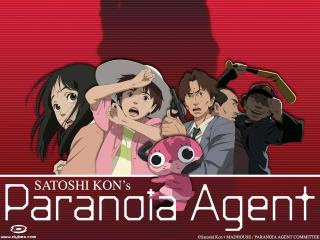 Paranoia Agent (or Delusion Agent, maybe) is an anime by famous anime director Satoshi Kon, unfortunately killed by cancer in 2010. His work is always more than it seems, focusing on the inner worlds of people and how they all perceive things differently.

The anime is only 13 episodes and starts with a simple case of violent assault on the street and then becomes stranger and stranger until it is not clear which is real and which is in someone's head. It critiques the repressive Japanese society and human nature in general, it goes from police procedural to slapstick comedy, from horror to psychological drama. The ending is, as they say, a mystery that doesn't stay solved for long. I quite liked the anime and I recommend it highly. It is rarer and rarer to find Japanese anime which is not derivative or simply idiotic.