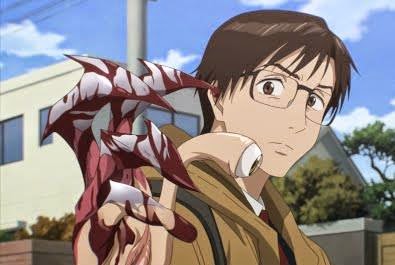 OK, I have no idea what most Japanese titles want to say. Is this about a parasite who is also a short, pithy statement expressing a general truth or rule of conduct? No, it is not. Parasyte is about a guy who gets infected by an alien metamorph, but somehow he manages to contain the infected area to his right arm. As a result, he maintains his personality, but now has a powerful alien as his right arm. It can change shape, it is very intelligent and it is generally useful when dealing with other afflicted, who usually have their brain infested, and thus are alien in their entirety.

Of course, being a Japanese anime, our hero is a high school male student after which a number of girls are pining for no good reason and that he has to fight to protect. No scenes of using his versatile tentacle arm on these girls, though. There are also some discussions about the role of these parasites and/or humans in the world, a vague ecologist propaganda that really has nothing to do with the plot and lots and lots of gore. The interaction between the human highschooler and the amoral and fiercely individualistic alien makes for most of the fun in the anime.

The series is ongoing, but I just watched the first 23 episodes and I can safely say that they could have stopped there. Probably they can come with fresh ideas, but for me the story started and ended satisfactorily with episode 23. The animation is good, but nothing spectacular, the Japanese cliches are abundant, but only barely overused and the main character is someone you can easily like and understand.

As far as I can see the anime faithfully follows the manga and episode 23 ends where the manga chapter 62 ends. There are just two other manga chapters published, so the anime and mange are pretty much synchronized. You can read the Parasyte manga online.