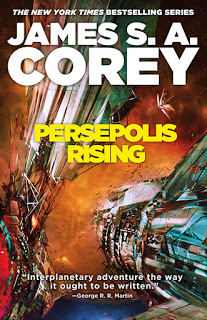 Persepolis Rising went into an interesting direction. One that I don't particularly like, but interesting nonetheless. The seventh book in the Expanse series is happening about 30 years after the sixth. You have to remember that lifespan is slightly longer in the future, so that's not a show stopper or a revamp with new characters. It also featured yet another condescending asshole who wants to rule everything using the protomolecule.

Now, the thing I love about The Expanse is the locality in the Solar System, the exploration of the near future society of space that is mere decades away from now (assuming we discover the Epstein drive, hmm...) Moving the action on other planets in other systems, more into the future and messing with alien tech doesn't help that. Instead it is turning it into yet another Stargate or similar franchise, where they just up the ante until there is no more up and people are bored. The authors have dodged the same bullet a few times in the past, though, so it just may be that they are aware of this and careful to thread the fine line between hard sci-fi and the ability to relate to what is going on in the story.

There isn't much about the story that I can tell without spoiling it. Some dudes want to go Roman Empire on the 1300 solar systems available and "civilize" humanity. Holden and the crew of the Rocinante have different ideas. However, the book basically ends in a cliffhanger so if you hate that kind of stuff, I recommend you postpone reading it until the eighth book is published. I liked the writing, the pacing and again I read it in mere days. Is it a masterpiece, not really, but it reads well. Now I have to wait until I can get my hands on the next book to see where the story is going, but considering that plans are to end the series with the ninth book, I wonder if I shouldn't just wait until they are all written and spare myself the misery of ending up with another, larger, cliffhanger at the end of the next part of the story.

Conclusion: I liked it, but I would much rather have read another dozen books about the Belters and how they made their home in the asteroids. If you think about it, the last few books did away with even the pretense of space colonization realism and it is always a small pain seeing how the stories always favor planets, which are not only less rich with the type of materials needed in space, but also have a lot more limited space. Asteroids can support trillions of people, and that in this Solar System alone. But that's another rant altogether. Just make sure you calculate the exact energy and reaction mass you want to spend in reading and then waiting for the next part of the story, which may not be published yet.