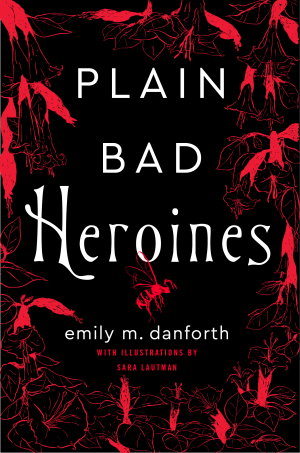 Plain Bad Heroines is a lesbian gothic book, as it features unexplainable horror and almost everyone in it is gay and female. Should I call it sapphic gothic? It has the benefit of scaring you twice as much if you're homophobic, I guess. The first thing you notice is how well the book is written. Emily M. Danforth is clearly a talented author and she must be praised for it. I continued to read the book until I finished it mostly because of how well it was written. However, while I am a fan of intermingling stories and self referential prose, most of these stories bored me to tears.

It is possible, though, that I was not connected to the subtleties of the book, as I was frequently falling asleep while reading it and starting to read it again from a random point that seemed vaguely familiar. I mean, it is a book about the making of a movie that is based on a book, itself inspired by Capote's unfinished work, that researched the spooky happenings at an isolate manor which was being used as a girls only school in the 1900's and where said happenings were being associated with a book written by an outspoken bixsexual feminist who wrote a confessional memoir. And that's just the synopsis. It talks about life in the glamourous Los Angeles movie scene, about societal gossip and the history of Truman Capote, the more or less overt lesbianism accepted at the beginning of the 20th century in high class educational institutions, book writing, sexting and flirtation, life under the spotlight with crazed fans following your every move, witchcraft, even a nod to Lovecraft.

The thing that bothered me about the storytelling was that most of these subjects were not interesting to me. They felt neither very personal nor technical. As a book inspired by two others, one a shockingly honest autobiography and the other a shockingly honest autopsy of high social circles, Plain Bad Heroines felt really subdued. The scenes that most elicited emotion out of me were neither the lesbian romance, nor the behind the movie scenes machinations, nor the old timey 1900 era rich manor life. It was the witchy curse scenes, which in the end had a very underwhelming explanation. It felt like a book about nothing, going in circles around the point that it was trying to reach, but never getting there. It was a rim job!

Bottom line: probably more subtle that I understood it to be, it might be just the thing to read if you're gay or into the socialite L.A. life. To me it was difficult to finish and find an interest in.