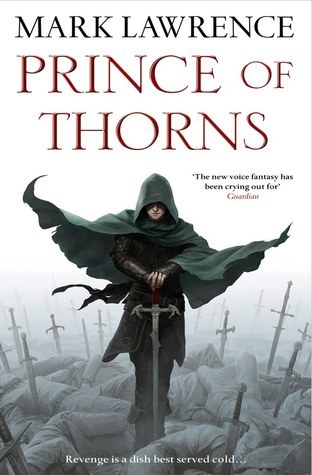 While on the road with his mother and baby brother, a ten year old prince is attacked by an enemy armed group. Thrown into a patch of thorns from where he could not move, only watch, he sees his mother defiled and killed and his brother smashed on a rock like a toy. He vows vengeance. Such a classic story, right? Only we see him a few years later, leading a band of brigands, murdering and looting and raping, his vengeance all but forgotten and replaced by a desire to unite all the hundred little states warring against each other. Well, more interesting, but still pretty classic, right? Nope, stuff still happens that makes the lead character (and you) doubt his thoughts and the true nature of reality and retroactively explains some of the more incredulous questions that the reader is asking.

I would say Prince of Thorns is all about revealing layers of this world that Mark Lawrence is still shaping. I quite liked that. The first book sets things up, but it is not a setup book. It is filled with action. Nor does it tell us everything, leaving a lot to be explored in the next books in the series. That's something that is sorely missing in many modern stories. In order to enjoy the book, though, you have to suspend your disbelief when it tells of an eleven year old boy smashing heads, swinging swords and leading men. Yes, in feudal times being 11 is the time to have a midlife crisis, but it is all a little bit too much for a child.

It is a game of thrones kind of book, but mercifully from the standpoint of a single character. There is not a lot of lore, but there is magic and a mysterious connection to an advanced but now dead civilisation, plenty of violence and strategy. I will probably read the next books in the series.