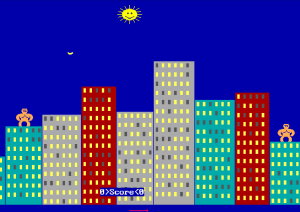 This post will take you on an adventure through time and sound. It will touch the following software development concepts:

In times immemorial, computers were running something called the DOS operating system and almost the entire interface was text based. There was a way to draw things on the screen, by setting the values of pixels directly in the video memory. The sound was something generated on a "PC speaker" which was a little more than a small speaker connected to a power port and which you had to make work by handling "interrupts". And yet, since this is when I had my childhood, I remember so many weird little games and programs from that time with a lot of nostalgic glee.

One of these games was Gorillas, where two angry gorillas would attempt to murder each other by throwing explosive bananas. The player would have to enter the angle and speed and also take into account a wind speed that was displayed as an arrow on the bottom of the screen. That's all. The sounds were ridiculous, the graphics really abstract and yet it was fun. So, as I was remembering the game, I thought: what would it take to make that game available in a modern setting? I mean, the programming languages, the way people thought about development, the hardware platform, everything has changed.

In this post I will detail the PLAY command from the ancient programming language QBASIC. This command was being used to generate sound by instructing the computer to play musical notes on the PC speaker. Here is an example of usage:

This would play the short song at the beginning of the Gorillas game. The string tells the computer to play the sound in the background, at a tempo of 160 in the first octave, with notes of an eighth of a measure: CDEDCD then end with quarter measure notes: ECC. I want to replicate this with Javascript, one because it's simpler to prototype and second because I can make the result work in this very post.

But first, let's see how musical notes are being generated in Javascript, using the audio API. First you have to create an AudioContext instance, with which you create an Oscillator. On the oscillator you set the frequency and then... after a while you stop the sound. The reason why the API seems so simplistic is because it works by creating an audio graph of nodes that connect to each other and build on each other. There are multiple ways in which to generate sound, including filling a buffer with data and playing that, but I am not going to go that way.

Therefore, in order to PLAY in Javascript I need to translate concepts like tempo, octaves, notes and measures into values like duration and frequency. That's why we need a little bit of musical theory.

In music, sounds are split into domains called octaves, each holding seven notes that, depending on your country, are either Do, Re, Mi, Fa, So, La, Si or A, B,C, D, E, F and G or something else. Then you have half notes, so called sharp or flat notes: A# is half a note above A and A♭ is a half note below A. A# is the same as B♭. For reasons that I don't want to even know, the octaves start with C. Also the notes themselves are not equally spaced. The octaves are not of the same size, in terms of frequency. Octave 0 starts at 16.35Hz and ends at 30.87, octave 1 ranges between 32.70 and 61.74. In fact, each octave spreads on twice as much frequency space as the one before. Each note has twice the frequency of the same note on the lower octave.

Frequency = Key note * 2n/12, where the key note is a note that you use as a base and n is the note-distance between the key note and the note you want to play.

Having computed the frequency, we now need the duration. The input parameters for this are: tempo, note length, mode and the occasional "dot":

This gives us the formula:

With this knowledge, we can start writing code that will interpret musical values and play a sound. Now, the code will be self explanatory, hopefully. The only thing I want to discuss outside of the audio related topic is the use of async/await in Javascript, which I will do below the code. So here it is:

There are two concepts that were used in this code that I want to discuss: named regular expression groups and async/await. Coincidentally, both are C# concepts that have crept up in the modern Javascript specifications when .NET developers from Microsoft started contributing to the language.

Named groups are something that appeared in ES2018 and it is something I've been using with joy in .NET and hated when I didn't have it in some other language. Look at the difference between the original design and the current one:

There are multiple advantages to this:

My advice is to always use named groups when using regular expressions.

Another concept is await/async. In .NET it is used to hide complex asynchronous interactions in the code and with the help of the compiler helps with all the tasks that are running at the same time. Unfortunately, in C#, that means polluting code with async keywords on all levels as async methods can only be used inside other async methods. No such qualms in Javascript.

While in .NET the await/async system runs over Task<T> methods, in Javascript it runs over Promises. Both are abstractions over work that is being done asynchronously.

A most basic example is this:

You see that the await/async way looks like synchronous code, you can even catch errors. await can be used on any function that returns a Promise instance and the result of it is a non-blocking wait until the Promise resolves and returns the value that was passed to the resolve function.

If you go back to the QBasicSound class, at the end, depending on if the sound is in the foreground or background, the function is either awaiting a promise or ... just letting it run. You might also notice that I've added a delay function at the end of the code which is using setTimeout to resolve a Promise. Here is what is actually going on:

In the first case, the Promise that was constructed by a one second delay and then logging 2 is awaited, meaning the code waits for the result. After it is executed, 3 gets logged. In the second case, the logging of 2 is executed after one second delay, but the code does not wait for the result, therefore 3 is logged immediately and 2 comes after.

What sorcery is this?! Isn't Javascript supposed to be single threaded? How does it work? Well, consider that in the delay function, the resolve function will only be called after a timeout of one second. When executed, it starts the timeout, then reaches the end of the function. It has not been resolved yet, so it passes control back to the engine, which uses it to execute other things. When the timeout is fired, the engine takes back control, executes the resolve function, then passes control back. All of this is invisible to the user, who gets the illusion of multithreaded behavior.

Already some standard out of the box APIs are async, like fetch. In order to get an object from a REST API that is called via HTTP the code would look like this:

I spent an entire day learning about sounds and writing code that would emulate QBASIC code from a billion years ago. Who knows, maybe my next project will be to port the entire Gorillas game in Javascript. Now one can lovingly recreate the sounds of one's childhood.