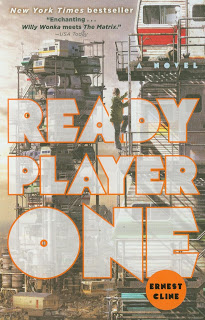 If you were born before the 80s, Ready Player One is going to fill you with melancholy. Ernest Cline combines several classical young adult themes - like a battle versus an oppressive corporate evil, true and pure love, villainy and lack of honor defeated through friendship and good feelings - with (often obscure) geek memes of the 70s and 80s. If you are the kind of person who likes to impress by quoting lines from movies or telling of your adventures in games that are older than your children, this is the book for you. OK, I won't be mean, the book is going to be fun no matter when you were born, but the level of enjoyment may vary.

However, the book is still a young adult book at its core and, besides the overall message that you actually have to make an effort to reach your goals - an often neglected tidbit in young adult books and movies - it reads like one. Young heroes, with enough skill to pass through the challenges of the story, but awkward enough to also be endearing, manage to save the world through the power of their dedication and ideals. Also Chekhov's Gun has been used so much that it left gaping holes in the story. Amazing how random things in the story come perfectly together at the end. Let a bitter Harry Potterish aftertaste.

But let's start with the plot, which is pretty fun. It all happens in a dystopian world where energy reserves dwindled, gasoline became way too scarce and expensive, Elon Musk never happened and most people live their lives in a virtual world called OASIS, created by a brilliant yet reclusive visionary who made sure the system will remain secure and anonymous. Kind of like the Internet, but without the MPAA or the NSA. Yeah, it already sounds like an impossible dream, doesn't it? Well, the maker of the game world dies and leaves his entire estate (hundreds of billions of dollars and complete control over OASIS) to whoever finds the Easter Egg he his inside the game. The heroes of the story are young "egg hunters", while the villains are corporate drones who have been hired to find the egg for their company.

The writing style irked me a little. I know it is Cline's first book, and it certainly was a decent effort, but it had that way of explaining things that I call "fake past" in which the narrator explains things as if he is telling a story from the past. "The OASIS was...". Since this is supposed to happen in the future, it took a while until I could stop feeling irritated by it. However this has the advantage of being very easy to read.

I think it matters a lot if the reader is into cultural references. I could understand some, I could remember some, most of the references in the book, though, were ancient or obscure enough that even I didn't recognize them, and I am a pretty geeky person. I felt rewarded when I could "get it" and frustrated when I didn't, so probably it will be the same for most readers. If you don't care about these things, I think it is better to wait for the movie.

...which is in the works, with Steven Spielberg attached to the project. It might be difficult to put the story on the screen, though, since the book made an effort to describe a future world where everybody is obsessed with this specific period of the late 20th century, kind of like the Star Trek episodes that happened in the past or that required Kirk or Picard to know some specific book from the school curriculum. There is even a Ready Player One web site, that might have some Easter eggs in it (they would be dumb not to program some) but to me it seems both way too geeky and way to social at the same time.

Bottom line: a fun book for geeks. I hope it inspires the younger generations to look at the world a little bit differently, but I don't have my hopes up. My guess is that they will go all 'Meh' on a story that references anything that happened last century.