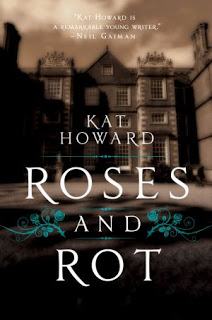 This reminded me of The Call, by Peadar Ó Guilín, another very well received book I've recently read. It features a female perspective, fairies and an unapologetic dissection of the human soul. The Call is better, but still, this is a very interesting book I will also recommend reading.

In Roses and Rot, Kat Howard uses the world of the Fae as an excuse to examine the bonds between people, the toxic effects of self-centeredness, whether in a parent or in yourself as you try to achieve some of your goals at the expense of others, and how people have to sacrifice for what they love. Imagine a magical place where everything is offered to you on a silver platter, with the promise that the best of you will get... a golden platter or whatever. And there is always a price.

I liked the psychological aspects of the story. There isn't much else of it, actually. As I said, the magic is merely incidental as the book is about the struggles of artists and daughters of idiots. I would go as far as not calling it fantasy at all. I disliked the close similarity between Janet and the girls' mother - I won't expand on this for fear of spoiling it. Enough to say that Helena's character and sidestory felt like a training run for what could have happened to the protagonist if not for her sister, so in one fell swoop, two characters from the already short list of relevant ones are just shadow copies of others. Add to this a lot of other details that are customized for the lead and you start to suspect this is a very autobiographical story. I don't know Kat Howard so well as to say it was, though. I will quote from the book though: “These [fairy tales] will be more autobiographical in nature than the Grimms'.”

Bottom line: It was a heartfelt story and I liked it. It is also short and not part of a billionogy, so you can just read it and enjoy it. Less fantasy than psychological drama, though.