Every time I've heard about this anime I refused to watch it for the very simple reason that the American "brand name" was Samurai X, which pretty much sucked tremendously. But, while reading a list of Shōnen anime series, I've decided to give it a try. And it, real name Ruruoni Kenshin, was a decent anime. 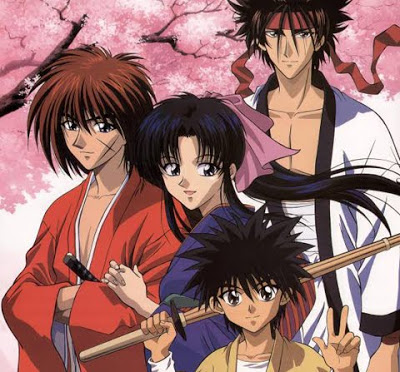 Staged in the beginning of the Japanese Meiji era (the reconstruction, as they call it, after American battleships forced the country to open its borders to the outside world) it features the adventures of former samurai assassin Himura Kenshin Battousai, fighting for the imperialists in the Tokugawa era, now reformed as a wandering samurai and having vowed not to kill anyone anymore. He manages this feat by using a "reverse blade" sword, which has the cutting adge on the inside. He thus manages to beat the crap out of people without actually killing them.

The series reminded me of Twilight Samurai, the movie that I liked so much, because it shows the feelings of people in the middle of great social and political change. Featuring 95 episodes, it is split in three main parts.

The first is how Kenshin moves into a sword dojo ran by a beautiful and single girl (heh!) and how they save a little boy from thugs and thus they become sort of an unofficial family. His "man slaying" past is slowly eroded by the contact with this pure hearted people. During this period he gets to fight several enemies, each stronger than the others, but keeping his vow not to kill anyone.

The second part is a large story arch in which he fights against a plot to overthrow the Meiji government and bring Japan to another period of chaos and war. The story culminates with the battle against a former "manslayer", the mastermind of the said plot.

The third part is mostly a mix of different stories that pretty much breaks the spirit of the first two parts. Instead of getting better, it grinds to a stop and then even gets worse. In this section he gets to fight "Feng Shui" masters and participate in all kind of filler episodes.

I felt that the series had a very nice feel to it, so I would recommend anime fans to watch it, but with the third part optional. There are also several OVAs that I am yet to watch. Happy viewing!

Update: I have watched the 6 OVAs and I was blown away. There are 4 episodes that make up an "origin story" for Kenshin, then a fifth episode which kind of summarises the series (badly) and then an ending that is both positive and extremely sad (in that typical Japanese suicidal way :) ). The animation is way more mature, the plots more complex, the characters have real feelings and there is no comedy whatsoever, getting back to that good feeling I had when I started to watch the series. Also the audience is different: the battles are realistic, with wounds and lots of blood, no magical mambo-jambo, while the characters behave more traditionally, with the women being more passive and the men more closed up.

All in all, the origin story makes the series seem childish at best, however I would recommend it being watched after seeing the series, just as I did.