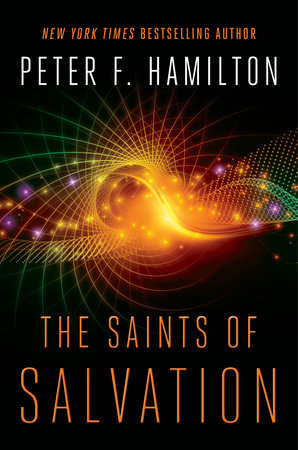 In this trilogy, the first two books were filler promising much for the last one, The Saints of Salvation. And I had to force myself to read it, just to get it over with. Most of the book is about these people pointlessly living their lives and daring you to remember all of their names. I couldn't feel a connection with any of them, so all that was left was to bask in the space technology and the battles and the cathartic ending. Which was something brief and unfulfilling.

I don't want to spoil this, just in case you like it and want to read it, but Peter F. Hamilton's knack for ruining endings is present here as well. Obsessively trying to close all the loose ends (that no one cared about) and make them connect to each other (for no reason whatsoever) after the unsatisfying ending makes things worse.

If I were to guess, Hamilton searches for a new universe, one that is kind of inspired by the Commonwealth universe, but it is not as technologically advanced so that it can provide new interesting opportunities for story telling. Salvation was an attempt at a new universe, inspired by British history during the Blitz yet set in the future, but it got really fast into portals and exotic wormholes and gravitonic weapons and quantum effects and ineffectual aliens. Meanwhile the storytelling was lacking! I really hope he moves on to something else.