Finally, finally there is a TV series about an asteroid coming towards Earth and what we are going to do about it. It is called Salvation and it fails in every single respect. 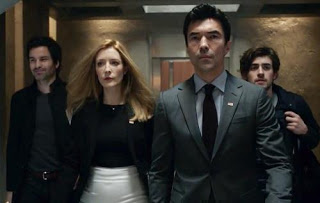 The first alarm bell was Jennifer Finnigan, the female costar from Tyrant. She was terribly annoying in that show where she posed as the voice of reason and common sense, while being a nagging and demanding wife to the ruler of a foreign country. I thought "shame on you, Siderite! Just because she was like that in that show it's no reason to hold it against the actress". In Salvation, she plays the annoying nagging and demanding voice of reason and common sense as girlfriend to the secretary of the DOD.

But that's the least of the problems of the show. The idea is that a brilliant MIT student figures out there is an asteroid coming towards Earth. He tells his professor, who then calls someone and then promptly disappears, with goons watching his house. Desperate, he finds a way to reach to an Elon Musk wannabe and tell him the story. Backed by this powerful billionaire, he then contacts the government, which, surprise!, knew all about it and already had a plan. Which fails. Time to bring in the brilliant solution of the people who care: the EM drive! For which there is a need of exactly two billion dollars and one hundred kilograms of refined uranium. And that's just episode 2.

The only moment we actually see the asteroid is in a 3D holographic video projection, coming from most likely a text data file output of a tool an MIT student would build. Somehow that turns into a 3D rendering on the laptop of the billionaire. Not only does it crash into Earth, but it shows the devastation on the planet as a fire front. Really?

Bottom line: imagine something like Madam Secretary which somehow mated with the pilot episode of the X-Files reboot. Only low budget and boring as hell. There is no science, no real plot, no sympathetic characters, nothing but artificial drama which one would imagine to be pointless in a show about the end of the world, and ridiculously beautiful people acting with the skill of underwear models (Mark Wahlberg excluded, of course). Avoid it at all costs.

Update: oh, in episode 3, the last one I will watch, they send a probe to impact the asteroid and they do it like: "OK, we have a go from the president!" And in the next minute they watch (in real time from Io and from a front camera on the probe) how it is heading towards the asteroid. I mean... why write a story and not make it use anything real? What's the point in that? Even superhero movies are more realistic than this disaster. I know the creators of the show did other masterpieces such as Extant and Scream: The TV Series and Hawaii Five-O, they don't know any better, but at least they could have tried to improve just a tiny sliver. Instead they shat on our TV screens.