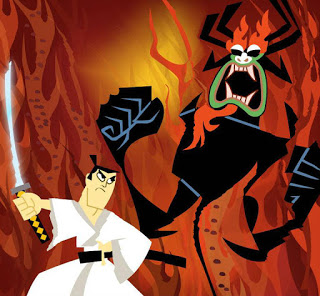 16 years ago, Samurai Jack premiered as an animated show where a honorable samurai travels through time to destroy the demon Aku, who has taken over the world and made it evil. With Genndy Tartakovsky's genius behind it, this tale of good versus evil never seemed too simple or too idealistic, something movies today and in the future need to learn. However, after only four seasons, the show was not renewed, leaving fans with the bitter sweet conclusion that evil will triumph if no one fights against it, especially in the world of movies and series.

And people fought and the series received its continuation... and its ending, a season 5 that ends in a glorious finale. What comes next is a spoiler for the last season and the show's finale, you've been warned.


For Entertainment Weekly, Геннадий had this to say: This is it. This is the definitive end, and it’s a great end. I haven’t seen it yet, but I’ve storyboarded it, and I think it’s super satisfying, and it should close the door for me for Samurai Jack. … Now, look, there’s 50 years between season 4 and season 5, and if somebody wanted to jump in and do some stories in between, but for me this is the end

Anyway, I really hope Tartakovsky comes with something new soon, something that is just as creative and just as actual as Samurai Jack was. He somehow made a show about a samurai feel futuristic. That's not easy. And even his most childish shows, like The Powerpuff Girls, were great. He will be directing Hotel Transylvania 3 next, but I really wish he wouldn't burn out and stick to movies, especially stupid ones like this, when his shows were the highlights of my youth.