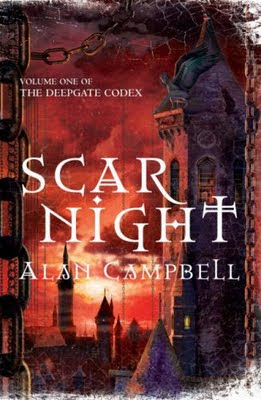 I was reading this interview of the guy from The Wertzone blog, a Sci-fi and fantasy blog that I enjoy reading, and he recommended some movies and some games and some books. So, on his recommendation, I started reading Scar Night, by Alan Campbell, and I have no reason to regret my decision (other than the one I will not be able to read another technical book until I finish the saga).

The writing style is nice, although I wouldn't say it rocked my world, however the world the author has envisioned is really great. Imagine a large city built upon great chains of alien metal, suspended over hell itself, inhabited by people worshiping a version of the devil, their church defended by angels called archons and armies of assassins. There is more, but you just have to read the book. What I also enjoyed tremendously is that the characters are very different from one another, ranging from mad scientists to priests corrupted by their desire for the greater good, from good hearted assassins to undead gods and inept cowardly angels.

I can only recommend you read this book, the first from the Deepgate Codex trilogy. Funny enough, the writer, Alan Campbell, was one of the authors of the Grand Theft Auto game, so he is also a software developer. I am hooked.