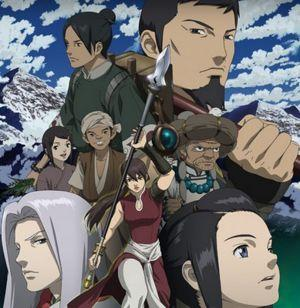 Another pearl in the anime pond. One just has to dive and grab this fairy tale and watch it. Seirei no Moribito is the story of a female bodyguard, bound by honor and personal history to defend a child prince from the assassins sent by his father, the emperor. The anime is not really a fighting anime, though, no one battles for the sake of battle. More than that, the "ona yojimbo" has vowed to save lives, not take them, so she never kills anyone. All characters in the story are clearly drawn up, with their own particularities and personal motivations to do things and in the end, there is even a eco green moral. :)

My advice it to watch it, as it is both a beautiful story, as well as a complex one, fit for both adults and young children. Only 26 episodes, but it is worth it. I would really like to see animes for the rest of the books in the series. You can also read the first two chapters of the manga at Mangafox.