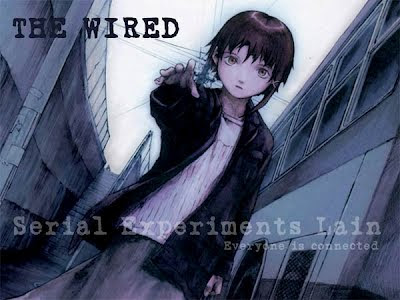 Serial Experiments Lain is a strange little anime. It reminded me a bit of Dennou Coil, but the subject was more akin to the show Caprica, as it covers virtual worlds, disembodied conciousness, gods and the barriers between what is real and what is "Wired". It was also psychedelic as hell at times, full of fractured philosophical ideas that were presented in digital like flashes.

After all its 13 episodes, it is hard to say what I was left with. I enjoyed the show, but more because of its overall subject and weird presentation. I am sure I haven't understood half of what the creators were attempting to communicate. In a way, it is an abstract art anime, which might not appeal to some people and other people might like it for completely different reasons than intended, such as myself. I couldn't shake the feeling that this is what the Japanese would have done if they were making Caprica. How the characters see the connected world is interesting, as something almost occult, that can store human conciousness into protocols that are hardly well understood and that have evolved organically in time. The concepts of ego and self are also explored, when one has to ask: if I am both connected in a virtual world and have a body in the real world, where is "I" ?

All in all a pretty decent anime, something that lacked any attempt to make it artificially humorous. No highschool love stories, no weird lewd jokes, just the plain storyline. I liked it.