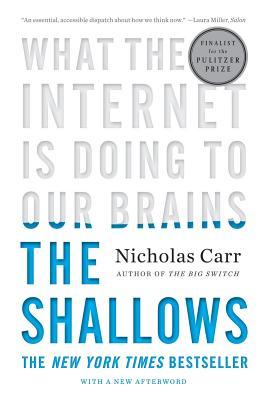 It's very rare for me to have such a strong reaction to a book as I has to The Shallows. A combination of high expectations from the people who recommended it and the ironically poor quality of the book almost forced me to stop reading it. It gives me a great and perverse pleasure to summarize this book into a single paragraph: the Internet is bombarding us with information and stimuli, therefore training our brains to skim the surface of things and depriving us of the ability to "deep read", meaning slowly digesting large blocks of text and fully processing what we read is now difficult to impossible for most people. That is it! There is nothing else in this book. And the reason why this book was bad is that it brings nothing more to the original idea explored by the author in an Atlantic Monthly cover story than quotes from other people who agree.

Nicholas Carr decries (and cries and cries) the way the medium of the information we digest is changing the way we process that information. He uses page long paragraphs filled with big words meant only to make him look well read to repeat the same things over and over again, all the while complaining about people skipping to the juicy parts. I mean, I've been known to use a few pompous words myself, but I don't think I've ever went out of my way to use complicated expressions when simpler ones would do.

The multitude of citations from people ranging from ancient Greek philosophers to Artificial Intelligence scientists are cherry-picked to make his case of the demise of the "deep read" in favor of meaningless web skimming. Carr makes the correct case that too much information trains us to not completely absorb the content of the things we read, but he completely misses the mark on why that happens, ironically made evident by his style of writing: boring, pompous, long, verbose. In a classic (by now) bubble effect, he writes a book about his fears that no one but people who share those fears would actually be able to read.

Also ironic is that he makes some predictions (in 2010) about artificial intelligence and how people will use the various (and nefarious) web services like Google Wave that now make one laugh out loud.

The point, Carr, is that people who are bombarded with lots of information learn to quickly categorize that information, then send it in the correct bin. You skim an article, see that it is mostly word filling around a central idea, you extract that idea, then move on. There is no deep reading because there is no deep writing. It happens with books, too. One is quick to determine when one book is captivating, engaging and well researched rather than repetitive, single-sided and written for the pleasure of reading oneself and looking smug rather than for knowledge sharing or the pleasure of others. The point (made clearer by research in how AI systems designed after brains function) is that this is how brains have always worked: filtered out as much as possible of the meaningless and tried to absorb as quickly as possible the meaningful. It is literally a search for meaning, you buffoon!

So, yes, no one finds the time to laboriously study a book, annotate it, keeping well received paragraphs and quips in notebooks they carry with them. But that is because there is more information out there that brings more value through its diversity. In a very sad way, The Shallows reminds me of those religious people who complained about how laic books made people not study the Bible and absorb its teachings.

Now, the book is not completely without merit. It's just very annoying. The way we use our brains does change the abilities we later have. It's what brains are meant to do: adapt.

Would it hurt to regularly take a break from distraction, reading something that we have decided is important and high quality, then taking the time to think and absorb and maybe reread what we thought was valuable? No, of course not. I am intimately familiar with the restlessness that comes when trying to spend more than an hour doing the same thing or keeping my attention focused on one thing only. In this, Carr is not wrong. But in assuming that slowly and carefully navigating an avalanche of information is possible, he is definitely going too far.

Instead of complaining about how we don't absorb meaning because we are too busy filtering out noise, one could be optimistic about the ability of people, helped by technology and not despite it, to improve the way they separate chaff from wheat. Instead of decrying the size and complexity of the information that one must use, making it impossible to hold it all in one brain, why not enjoy the ability to collaborate, network and share that makes it possible for that information to be well processed by groups of people?

Bottom line: the ideas explored in this book are conservative in nature, fearful of change, focused on what drives that change yet blind on where it takes us. It is the intellectual pompous version of the old man wagging his cane in the air, shouting in anger at young people. It is a book that examines one phenomenon without bringing one any closer to an understanding of it. Woe betide things will change! Well, duh!