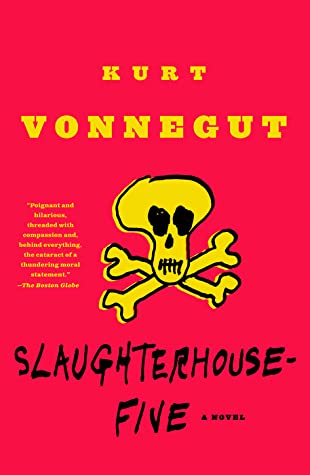 I have heard about Kurt Vonnegut a few times, like someone I just had to read. So I started with Slaughterhouse Five, first published in 1969 and widely acclaimed as his best work. I guess for 1969 it was great. It is subtle, it is poignant, it is ingenious, it is satirical, it is anti-war. It is not entertaining, though. It's just really sad and bleak.

Imagine if Forrest Gump would not have been a kind country boy with a slightly slow mind, but a guy heavily affected by PTSD after witnessing the horrific firebombing of Dresden, with illusions of alien abduction. Dresden was bombed in WWII into oblivion by British forces, some say as retaliation for the German rocket bombings of London, even if it was mostly a civilian city filled with refugees.

But that part of the book, which is drawn from Vonnegut's own experience, even if it is the event that caused everything, is placed at the end of it. The rest of it is the story of the fictional main character who becomes (or believes he does) unstuck in time, which allows him to randomly travel back and forth into his life. He is also abducted by aliens who live in four dimensions, time being the fourth one, and to which time, cause, effect, action and consequences are nonsense. Every moment is unchangeable and set and they can just visit any of them. It is worth mentioning that one of the symptoms of PTSD is this very realistic recollection of past events. It also makes sense for a person afflicted by this to build a narrative in which everything that happens, no matter how atrocious, is not preventable. Anyway, this way of telling events adds an interesting way of understanding them, allows for comedy and satire, makes it all very personal, which is good, but that's about the only thing I liked about the book.

Now, being studied in school, there are way too many commentaries and reviews trying to explain what the book was about and how brilliant it was. I can only say if I liked it or not. And the answer is that I understand why it is a highly regarded piece of literature, but I did not enjoy reading it. And not because it is terribly depressing, which it is, but because the main character is only interesting because he went through some horrific events, otherwise he is boring and worthless. This makes things even sadder, because this means a big part of the author felt that way about himself.

Bottom line: It may be poignant, as the cover says, but it is not hilarious. Instead it is depressing and gets so more as one understands more of it. It is a personal expression of deep trauma, so if you enjoy that kind of thing, this is the book for you.