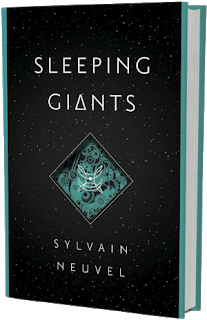 Gotta learn to not blindly trust book reviews that appear in my favorite web sites. I mean, they have the right to be wrong (aka to their own opinion). To be honest, I just expected the book to be better, I wasn't particularly upset with it. The review called it "the next Martian"; it's not even close. It's a completely different style, mood, idea and quality. But, that being said, I enjoyed it. Better still, I learned an interesting and probably valuable lesson out of it.

You see, Sleeping Giants is the closest I've come yet to a "hand held" book. The story is told exclusively through interviews and records of discussions. I mean, there is one scene where the heroes have to disarm some guards and instead of going quiet, they keep talking into their sat phone with someone so we can read what happened. It wasn't bad, but I sincerely hope that the rest of the books in the Themis Files series are not the same, although I am pretty sure I will not read them. However, I've learned from this. Even if you are shit at writing scenes, you can write a book that is being told through dialogue and short personal entries and tell the story.

So the story that Sylvain Neuvel tells is about us finding pieces of a giant alien robot and finding out how to operate it, even if the way it functions seems incomprehensible. I've covered the style, so now I have to tell you about the plot, which is naive to say the least, but enough to suspend your disbelief as you read the book. The beginning promises a lot more than the ending provides and, while I understand there is another book, I don't really care how the story ends.

Bottom line: a little fun sci-fantasy, with no real consequence or worth of mention. However, Sony did option the rights for the book, so who knows when we're going to get an alien robot defending the Earth against Godzilla movie, or whatever crap like that.