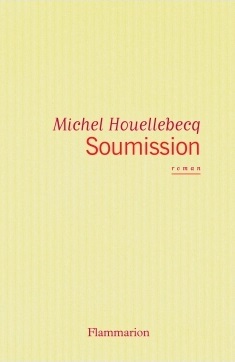 Submission is the most French book I've ever read. It's an intellectual examination of political France (and by extension the whole Europe) from the viewpoint of a womanising, wine drinking, misanthropic, misogynistic university professor as it is suddenly, but without resistance, turning Muslim. Bound to generate reactions, the book is tongue-in-cheek offending everything and everybody: political systems and pundits, religions and zealots, apathetic atheists, women, muslims. But it is also examining human failings and demanding a solution that doesn't completely suck. This is the first Michel Houellebecq book I've read. It intrigued me and I may read another soon.

Just a few quotes to wet your appetite:

The protagonist is a professor whose only love appears to be Joris-Karl Huysmans, of who he thinks constantly and of who he wrote the dissertation that allowed him his position teaching in the Sorbonne university. As the system in France is turned upside down by a combination of voter apathy and political mathematics, a Muslim party gains majority and, under the skillful leadership of its charismatic leader, it begins to turn France and then the whole Europe into a moderate Muslim empire fueled by petro-dollars.

Of course the premise is ridiculous, after all the book was written before Trump came to power, which seemed equally ridiculous right before it happened. The book compares the submission of women to their men, the only true way of achieving happiness, to submission to a religion, or a political system, or a literary philosophy. It is masturbatory in nature and speaks to one's weakness and decay. It is not an islamophobic book, it's a trollish, nihilistic book, meant to show how reasonable a change like that might seem when supported by politics and media and allowed by lassitude and apathy. Usually books like these end up describing the advent of some Nazi government ruling with violence, fear and ruthlessness. Houellebecq says no: let it be a moderate Muslim party that each divided part of society accepts for different reasons, but accept, submit, they do. The main character ends up considering converting to Islam and living his life married to three wives and teaching in the private Muslim university of Sorbonne.