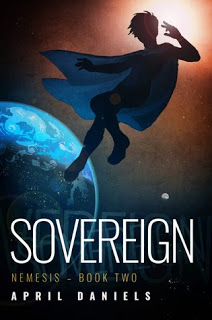 I liked Dreadnought, the first book in the Nemesis series. It was fresh, with a sympathetic character that went through some major changes in life. The team was interesting, the villain, too. A bit too female centered, a bit naive, but hey: it's about a teenage transgender superhero. What could I have expected? It says something about the book that I read the next one in the series.

Unfortunately, I almost disliked Sovereign. The discussions about weird sexuality (without actual sex scenes) and the characters that are connected to transgender issues increased, the character development stalled, some people simply disappeared (Danny's parents say two phrases in total in one appearance), the villain's motivation is stupid, the heroics are random and the drama and tension that should have kept a reader to the edge of the seat, curious to see what will happen next, are almost non existent. When people die, the heroes kind of shrug it off: "oh, we killed some people. Sucks!" Not an actual quote, but it felt like this. And the only reason why they find out about the villainous plan is because the head vil is literally inviting Danielle to his mansion to explain said plan. Some things happen just because the story couldn't go on without them, and it's painfully obvious. I understand April Daniels may have identified too much with her characters and is not eager to torture them, but the book felt like a kiddie show in written form.

I finished the book, but I won't be interested in the future of the series. And it's too bad. I felt that this concept was going places.