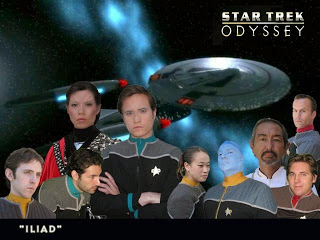 The same people that did Star Trek: Hidden Frontier created the three season Star Trek: Odyssey. The first season was pretty good, beginning a story that was a combination of Voyager, Deep Space Nine and even Enterprise, the second season had fewer resources and the third season was decent, but the story was a complete mess that was very hard to grasp. Luckily enough, the superfluous homosexual stories in Hidden Frontier were almost not existent in Odyssey. Instead we were treated to intergalactic invasions, religious empires, slipstream drives, artificial wormholes, omega particles, anti-omega particles, Romulan first officer played by lovely Michelle Laurent and some decent (not good) screenplay. The technical effects, acting and directing varied from OK to really bad. They clearly learned a lot from Hidden Frontier, but the green screen continues to be their greatest enemy.

Even better, it is a crowdfunded show and you can watch it all online, for free, on YouTube. Here are the links for all three seasons: