I've finished watching the seven seasons of Star Trek: Voyager and, even if I enjoyed watching it, I also think it was the series with the most potential lost from all of them.

First of all, the show should have been called Star Trek Condescension. Each Star Trek series before it had some obnoxious characters, like Bones in The Original Series, even if he was saved by the clever interactions with his counterpart, Spock, or like Deanna Troi in Next Generation, intrusive and opinionated about just about everything that did not concern her, or like Kira Neris, who always had some cause to fight in the detriment of all her other colleagues on Deep Space 9. It was OK, it part of the concept. Voyager has broken that rule, making just about everybody as annoying as possible.

Top of the list: Captain Janeway, who was not only acting like the headmistress of a high school, placed there by divine powers to have children under her care and control, but who was also a complete hypocrite, changing her views whenever it suited her, but quoting larger than life "directives" whenever she wanted out of something. For all her talk of saving lives, if the show was reality, she would have killed her crew numerous times and would have insured just about every major force in the quadrant was an enemy of the Federation. And the worse part is that her acting was perfect: from the condescending tone of her voice to the raised eyebrows, from the hand on her hip to the dismissive smile, her body language was more obnoxious than anything she could have said. 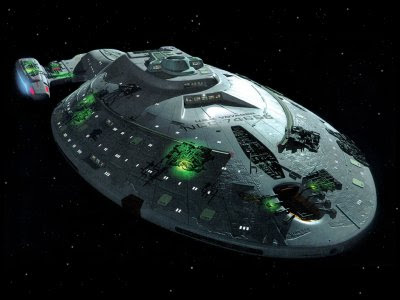 Second in command Chakotay, a man of native-American origins, would have no problem breaking any rule when his Maki training would surface, only to justify anything by either invoking his spiritual ancestors or spouting truisms while fully inhaling before each sentence. While Janeway's condescension was authoritative, Chakotay's was always thuggish, but just as strong and annoying as his captain's. Also, he was making mistakes almost every time it didn't involve physical activity. Not the best choice for a second in comand.

Neelix deserves a special place in the annals of obnoxiousness, as a rodent like alien who comes on board as the lover of this pixie like beautiful blonde. After suffering more than a season rude and abusive bouts of jealousy from him, we spend the rest watching him intrude in everybody's personal lives from his self appointed position of "moral officer" and later of "ambassador". Only in the last season a Q is fusing his jaws and lips and removes his vocal cords, a humanitarian move who only lasted till a few minutes later. Blessed be the silence, though.

There are more, from the loud mouthed doctor who is "evolving" from very rude to intrusive and almost destroys the ship twice with all the good intentions to the duo B'elanna Torres and Tom Paris, who act so superior towards anybody not like them that they would have undoubtedly made the alpha couple in a high school drama.

A good thing about the series is the design. All the technology is consistent in aspect and apparent functionality from the start to the end of the series. Considering Voyager was produced during amazing technological advancements in television and computers, it was probably an effort not many noticed. The human component, so easily removable via computers and nanotechnology, was preserved during the entire length of the series, maintaining that theatrical feel and enforcing the idea that the sci-fi in the series was just a prop for some larger ideas. Unfortunately, the ideas was not that large, and were mostly human centric and ridiculously optimistic.

About the plot, the show is about a Federation starship stranded in the Delta Quadrant, seventy thousand light years from Earth. The way people travel is the most inconsistent part of the series, as they are always struggling to get home, while the same aliens are attacking recurrently, even with less advanced technology. How could they "ambush" Voyager, if they were left behind?

The holodeck and the holographic doctor were used extensively as a plot crutch, whenever they were out of ideas. Meetings with the Borg are common, even if the results are mind baffling. One of the most disgusting things in the series is the treatment of Seven of Nine, a Borg that is being coerced back to individuality despite numerous declarations that it wants to return to the Collective. But Janeway knows best and all the list of annoying characters above proceed thereafter to piss on the Borg heritage of Seven and insist on developing her "humanity". If Voyager would be watched by the people described in the show, it would undoubtedly be considered crass human propaganda for the Federation.

And still, for all the reliance on Borgs to move the plot on, the technological side of the equation was repeatedly ignored. Seven is part Borg and will remain so for the rest of the series, including nanoprobes in her blood. Yet she does not attempt to assimilate anyone, including enemies, when it would have been the best way of solving some of the problems. Borg technology is added to Voyager, but most often reluctantly and only temporary. Seven never develops cybernetic tools for herself, even after her implants save the ship several times. Also the Borg Collective is presented as a mindless community of interconnected people, but at the end a Queen of the Borg is revealed, who has total control and presents a target and a persistent enemy.

Bottom line, for a technological person as myself, I was almost attracted more to the Borg model than the Federation one. While the words "democracy", "freedom" and "openness" were spouted at every occasion, true freedom of thought was only tolerated on Voyager when the captain agreed. The Borg at least used the individual as a conduit for the general thought. The morality lessons in the series were simplistic and antiquated. Voyager, with the idea of a ship stranded somewhere, with problems that needed solutions with limited resources and lots of ingenuity, could have been a series to open minds. Instead, it force fed US concepts from the 60's.