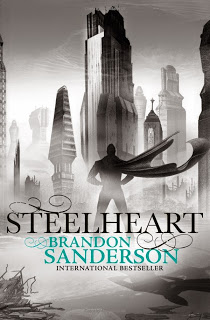 I am starting to like Brandon Sanderson. Only at the end of Steelheart did I realize that he kind of used the same plot device that he used for Elantris: the ten-years-ago one. Ten years before the action of the book, Calamity struck: a red star-like light in the sky that gave random people immense powers. The governments of the world tried to fight back, but all of them ended up capitulating, declaring "epics" as impossible to control as natural disasters. Enter David (the name probably not chosen at random) an eight year old child who witnesses the death of his father at the hands of an epic that then proceeds on taking over Chicago as his personal fiefdom. Now, at 18, David meets with The Reckoners - a group dedicated to fight back - in order to avenge his father.

First book in The Reckoners series, which is a planned trilogy, Steelheart is a very refreshing take on the superhero genre, original in the sense that it takes its name after the main villain and follows a young boy who advances in life using his cunning, knowledge and personal effort, not some random superpower. The characters are easy to sympathize with and the story is very nice. Not everything is perfect, as the story contains many political, economic and even technical plotholes. However, the writing is very well done, easily making the reader forget and forgive any inconsistencies between reality and the storyline.

As with Elantris, I listened to the audio version of the book. Classical narration, but was very nice. The book is a sort of young adult thing, but I enjoyed it very much nonetheless. I can't wait for the second book in the series: Firefight. I may have to first read Mitosis, a short story placed in the same universe.