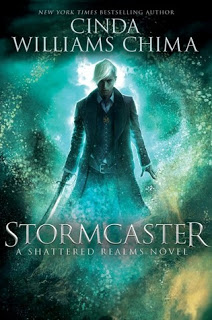 The Shattered Realms series is starting to gather momentum with Stormcaster. While Flamecaster was set mostly in the Arden empire and Shadowcaster in the Fells, Stormcaster goes everywhere, connects the characters developed in the first books and finally reveals the main villain. Unfortunately, that is all it does. Stuff happens, things are set up, people meet, then the book ends. We just have to wait for the fourth and maybe last book in the series to see how things end.

As I was complaining for the first two books, Cinda William Chima is really nice to her characters. The most that can happen to a hero in this series is that they lose a loved one. Even the scenes describing said loss are weak, almost neutral, like someone who would lose a lover or a parent and their reaction would be "Damn! That sucks!". She is definitely not George R. R. Martin and when reading these books remember that they are probably aimed at fresh teens. Heroes are all very young and yet competent and in control of their life. What child wouldn't love to read that?

Stormcaster brings us in contact with the remote empire from the East and its empress, along with a bunch of new characters. However we will have to wait until Deathcaster, probably the last book in the series, set to be published in April 2019, to see how the story ends.