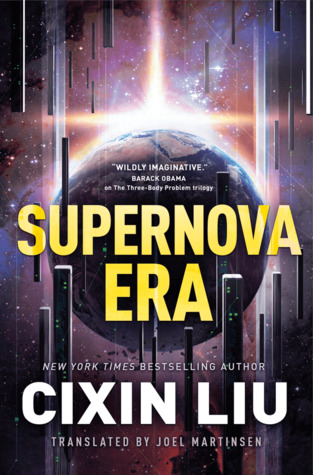 A few days ago I was stumbling upon a global pandemic book that I couldn't finish because it was avoiding the exact parts that would interest me in the scenario: the disease, the cause, the immediate aftermath. Instead it used the disease as a prop to describe a world in which only children survived. Disappointed, I randomly picked another book, this time one from Liu Cixin, the author of Three Body Problem, which I liked. Lo and behold, it was about a global catastrophe that kills all the adults, too! And while it started great, I have to say that it ultimately was also a disappointment.

In Liu's defense, it is a story he wrote in 1989, only published in China in 2003 and translated to English in 2019 because of his success with other works.

Supernova Era has a very interesting premise: a nearby star, occluded from us by a dust cloud, goes supernova, bathing the Earth in deadly radiation. People quickly realize that the genetic damage has affected everybody and only children under the age of 13 will be able to shrug it off, while all the adults will die. Children will have finally inherited the planet. What will the outcome be?

Unfortunately, this is where the nice part ends. The genetic damage on animals and plants is swept under the rug, logistic issues such as how children would be fed and countries run are only touched upon, the actual effects of radiation damage, its long time effects, the way it would have affected people are completely ignored. And this, also, because the supernova was only a prop to describe a world in which only children survived.

Liu had a really weird outlook on children back then. In his mind, children are lacking empathy, are only interested in games and even after a ten month training period from adults, they can only superficially grasp the nature of the world. And even if they are as old as 13 year old, they have no sexual drives. To be fair, I doubt that part would have passed by the Chinese censors, but not even mentioning it and portraying prepubescent teens as asexual feels even creepier than mentioning it too much.

And I remember myself at 12: I was reading five books at the same time, was interested in natural sciences and was avid for knowledge. If people would have said "Now we will teach you how to do what we do", I would have been immensely happy, at least for a little while. But one thing is certain, I loved my friends without reservation and I was always thinking of how I would change the world when I would grow up.

Not these children. They are written more as psychopathic caricatures of their nationalities. American kids start shooting each other for fun, Brazilians play games of soccer with a hundred thousand players and one ball and the Chinese succumb to fear when they find themselves under no authority and have to resort to a quantum computer to tell them what to do. They play war games that kill hundreds of thousands, but they are emotionally unaffected. They nuke their opponents for laughs. The ending is even more confusing, as it involves switching populations between the countries of the U.S. and China, for no apparent reason and ignoring transport issues and the immediate famine that would lead to.

Bottom line: an interesting premise that fails miserably at the end, even though the author did make the effort to finish the book. But that's exactly the feeling one gets: someone struggled to finish this, changing direction, bringing in random ideas that are never explored and ignoring the obvious.