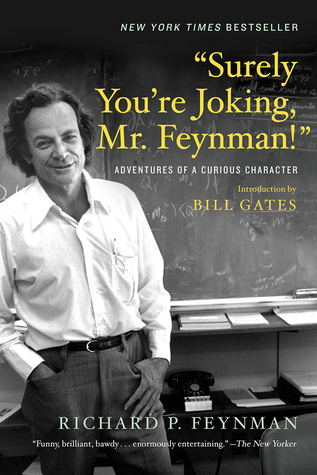 You may have heard of Richard Feynman from several sources: he was a Nobel winning physicist, he worked in the team creating the first atomic bomb, he said many a smart thing that turned into memes at one time or another and is generally considered a genius. This book is a collection of short anecdotal stories put on paper from recorded interviews with the man, in which you will be surprised to see that he didn't really consider himself very smart. Instead, he was looking at situations where the solution seemed perfectly obvious and did not understand why other can't see it.

I found the short tales pretty amusing, but also incredibly inspiring. Here is a physicist who makes a bet with an artist to makes one the teacher of the other, so that he learns to draw - something he feels to be impossible, and the artist understands more about science. In the end, Feynman sells paintings for money and the artist is none the wiser. Here is this person who at one time started fiddling with the safes in Los Alamos holding the secrets of the atomic bomb and found how easy it is to crack them. No one else thought it was easy. And above everything, he is always pranking people, making them believe he was smarter or more capable than he really was. But the joke was on him, because every time he did something, he really became good at it.

The title says it all: "Surely You're Joking, Mr. Feynman!": Adventures of a Curious Character. If anything, he was very curious and kept his mind open to any experience. It's people like these that I admire and, of course, envy with all my being. Feynman seems not only to be a complete man, in both work, fun and personal life, but also get more from the same experience than anyone around him. I found that fascinating and therefore I invite you to read the book yourselves.