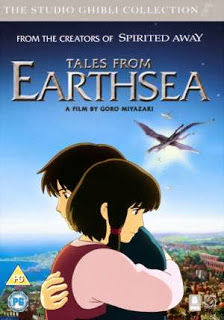 I've read Legends of Earthsea and so I knew a little bit who the characters were and what the story was supposed to be. And still I got confused on what exactly had Tales from Earthsea in common with the books I remember. First of all it is a loose adaptation of the third book, so if you don't know who Sparrowhawk or Tenar are, you are out of luck. Also the Nipponification of the characters makes things a bit lame; for example Tenar is a kind and spirited woman, but completely helpless and always in need of a male to come rescue her. Even Sparrowhawk, the greatest mage in existence, is easily captured or fooled. Then there is the repetition of the same bullshit that without death there can be no life, the reason that Cob needs to be defeated. It's such a Japanese way of accepting fate that has nothing to do with the Le Guin books.

Basically Goro Miyazaki turned this beautiful fantasy into a moralizing piece of crap, where the biggest sin is that one wants to avoid death. The anime is missing the point of the books, it's completely unintelligible without reading those books, and finally does nothing for the viewer. Just read the books and enjoy the story. Or at least see the mini series ecranization of the first three books, with Shawn Ashmore as Sparrowhawk and the beautiful Kristin Kreuk as Tenar. This anime, unfortunately, had nothing working for it except the excellent animation.

Just to understand how bad this film is, I went to Imdb to rate it and I noticed that I had already rated it before. So I have seen it already, but forgotten about it. That's how unmemorable it is.