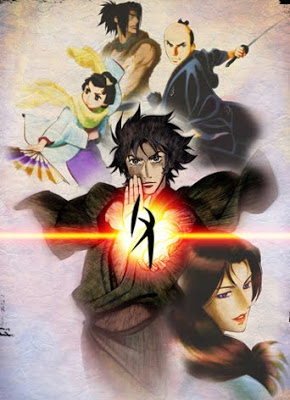 I quite liked this anime series, one which combined with success the typical demon slaying organisation with a background of describing the culture and history of Japan. In that regard it is quite similar to Ruruoni Kenshin, but without the romantic side and a bit more supernatural.

The plot is set somewhere in the middle of the 19th century, when a government official decided to create an organization to defeat Youi, or demons. These people are called the Ayashi. The main character is a guy that has the power to extract weapons and other useful tools from the names of things. It is a beautiful concept, since in Japanese the characters are very complex, have a lot of meanings and have a habit of evolving through history. Usually a demon can be defeated with a weapon made from it's name, which usually holds extra significance as to what the demon's reason to be is.

The series also describes a very feudal and disgusting Japan, where people are constrained to ridiculous levels by etiquette, social ladder, politics or gender. Many a time, to ensure the survival of their little group, their leader resorts to despicable acts which the team performs with disgust, but a complete lack of choice. Women are treated as commodities, low rank people as livestock, while the rich and powerful engage in complex political struggles to ensure their survival. Scholars are being imprisoned for studying Western concepts, foreigners are considered a bane that people should not come across, while people without a family name and land are tatooed as "floaters" and arrested if caught inside cities.

A lot of the details of the show are about Japanese customs, history and view of the world, so I naturally enjoy this as a background for a fun fighting story. Other people obviously did not think the same way, so it only has 25 episodes, even if originally 52 episodes were planned.

I haven't finished the series yet, I still have the last five episodes to see, but so far I have enjoyed it. There is a manga for it, too, but I didn't find it free online.